This blog post is guest-written by Clay Yapp, a Wisconsin native who is the farmer for Sola Gratia Farm in Urbana, IL. He will be leading both our Custom Tool Fabrication and Shiitake Production workshops. You can read more of his writing over at his blog, The Twisted Carrot. 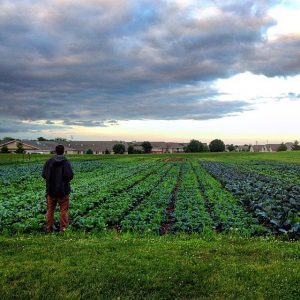 If you know me, you know that efficiency is kinda my jam. I like it when things run smoothly, like a big greasy machine. If we do it right, use our tools well and take advantage of our windows when we get them, we can almost get through the to-do list, (sometimes we even get halfway!)

My name is Clay, and I’m a farmer. I run production at Sola Gratia Farm, a 4-acre vegetable farm in Urbana, IL. Sola Gratia is an experiment to see if we can’t take a field provided by St. Matthew Lutheran Church, a dedicated crew of staff and volunteers, an organized, efficient system, and use it all to help make fresh, locally grown produce available to everyone, regardless of their economic means. We grow veggies for 120 CSA members who come pick up their boxes at the farm every Thursday, both the Champaign and Urbana farmers markets (Tuesday evening and Saturday morning, respectively), as well as for Common Ground Food Co-op, and several restaurants in town. We sell just enough to be economically sustainable; keeping staff paid and diesel in the tractor, everything else we donate to the Eastern Illinois Foodbank, who makes sure it gets out to the people who need it most. Last year we were able to donate 30% of what we grew, and in spite of some flooding, we’re on pace to hit that again this year.

We’re able to do that because we have a lot of different community resources available to us and we use them as efficiently as possible so we’re not spending time, money, or energy that we don’t have to. We have a system where many people can work together and be effective, and all the pieces have their place.

Here at Sola Gratia, we do things differently then most other farms because of the resources we have. We have very little money to play with (not that that’s unique) and no space to speak of when it comes to the greenhouse or the storage/packing shed (also, pretty par for the course). What we do have is a lot of people willing to give their time, and as such we set up the system to make the most amount of people as effective as possible.

A good example is that we make our own potting soil. Potting soil is a necessary expense for any operation that propagates their own seedlings, but it ain’t cheap. We have good access to the raw materials, so we mix it ourselves. Last year, we mixed it by hand, and it took forever, so over the winter I built The Tumbler. It’s dirt cheap (pun intended) with materials and time coming out to about $45. What it allows us to do is mix 12 gallons of soil in the time it took us to mix 3 gallons by hand. It lowers our cost of production on potting soil from $0.65/gallon, to $0.40/gallon. Wow, 25 whole cents, break out the champagne. Considering we mixed well over 750 gallons of soil this year alone, we’re calling that $200 worth of time saved. 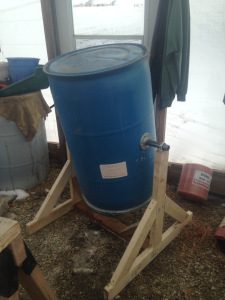 Then there’s the pallet jack. This is great because it doesn’t just save time, it saves our backs. We move tons of veg. Literally. Our wash pack tables are located about 30 feet from the door to the cooler. Now, carrying a 6 pound bin of salad mix up to the cooler, no big deal. Moving 10, 40 pound bins of Kohlrabi, on the other hand, uh-uh. With the pallet jack we can take 30 bins to the cooler at once. This saves us literally thousands upon thousands of these 15 second trips (a heavy 15 seconds, too) not to mention less time with the cooler door open. You do the math.

The newest and most exciting boost to the system is the introduction of a real, honest-to-goodness tractor. A couple wonderful, generous members of the CSA have offered to drive their sub-compact Kubota over and let it live here for the season.

So what does this mean for the farm? What have we been doing til now?

We’ve been using a BCS walking tractor for the past few years, a 2-wheel tractor with an 11hp engine that can run a few different implements. It’s a great machine, versatile, good in a tight spot, but it’s small. When you’re looking at tilling 4 acres before the rain hits and you can only do 20” per pass, it’s kinda like mowing the lawn with a pair of scissors. On top of that, it’s a bear to steer, especially in less than ideal soil conditions and after a couple days driving that, you feel a bit like a crash test dummy at the end of a long week.

The beauty of the Kubota is that even though it’s bigger, it still fits our bed system. We use a 42” bed setup, which is the width of the tiller and tire tracks on the Kubota. So, not only can I drive twice as fast and get the same tillage effect, I can do it in half as many passes. Half as many passes also means half as many 180 degree turns which are easily the most annoying and time consuming part of tillage. And in a year like this where we get about 15 hours of dry soil per month, the advantage this gives us is incalculable. 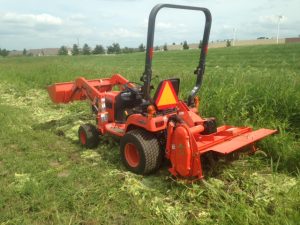 This is a big step for us that will have dozens of little, time and money saving ripples throughout the whole operation. It’s gonna make fall planting go so much smoother, and with any luck, we’ll get the weather to actually put it to use.

These are a few of the tools and tricks that we use to save hundreds if not thousands of hours over the course of the season.

An efficient system doesn’t happen overnight though. It’s not spontaneously generated from good intentions and a strong work ethic. It’s created by chipping away, bit by bit at the mountain of entropic forces, the tendency of the universe to veer (sometimes sharply) towards the chaotic and disorganized. As someone smart (probably a woman) probably said once, ”it’s a process, not a destination”.  What I love about this process is that it’s all based on math, and listening to the numbers. Numbers are elegant, intricate, and they don’t lie. This is why I’m all about the 1%.

Wait, now, hold on, let me explain. Not those 1%s. I’m talking about the 1%s that accumulate unnoticed like mud on the sole of your boot. Individually, those silica particles don’t look like much (cause they’re microscopic), but when you add ‘em up, they leave you feeling like you spent the day Riverdancing in muck boots.  If you’re farming in 2015, you know what I’m talking about.

It can be overwhelming to think about this in the context of a whole farming operation, like hundreds of tiny faucets leaking time and money, but I actually find it comforting. Because of the tedious nature of the work we do here, those small, easily fixable inefficiencies can add up to significant savings once they’re realized. If you’re a bean counter like me, then those 1%s are your wheelhouse. Most of them can be fixed with a change in motion, 17 cents, and some creativity. And they add up. If you can figure out a way to bunch kale 15 seconds faster, and you make 3,600 bunches of kale in a season (which we do), that’s 15 hours that you gain. That’s a whole day that you get to use somewhere else, and that’s what farming time is all about. If you can make the whole system 1% more efficient, and over the course of a year or five or ten, you can do that 25, 50, or even 100 times? Guess what, you just doubled your productivity.

Maybe that’s the difference between being ready or not for the rain; or maybe it’s being able to knock off for a 108 degree afternoon to drink a margarita in the shade. It’s your time; use it how you will.

See ya in the field, 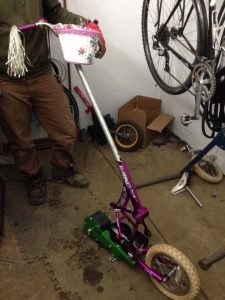 Farmer Clay with one of his custom-made, and very flashy, seeders.