I moved to Central Illinois from Southern Maine in late January of this year. I had lived in New England all of my life. There is a culture shock to that kind of move, even if it is within the same country. There are of course the basics (“corn and beans”, not “corn and soy”; streets lying out in predictable grids, yet often having names like 3205 County Road 1300 E) but with my work revolving around life on American farms, the distinction between each region’s “food movement” is the real shock.

I knew there would be differences, of course, but they are no longer as superficial as “big farm versus small farm” and “urban customer versus rural customer”. It begins with soil. When I came for my interview, a student in this year’s class asked me about farming in Maine. Among other issues, I cited the many rocks one will find. Holding up two fingers as an indication, he asked “are you talking about rocks like this (indicating the size of a pebble) or rocks like this (the size of a baseball)?” I gave a sad laugh and said, “No no, I’m talking about rocks like this” and held my arms wide. “Rocks big enough that sometimes you decide to just leave them where they are.” He seemed confused, not by the size of the rocks, but by why on earth anyone would farm there.

I can relate. As much as I had heard about the soil of the Midwest, seeing it and feeling it for the first time as the ground finally thawed this winter was a little overwhelming. Sure, the previous person to own the yard was clearly an active gardener, but even so, this soil was black and incredibly deep. What’s more, I could count the rocks I found on one hand, and they consisted of a few bricks and an abandoned concrete column. Growing up, whenever we found a rock while digging in the yard (a few per shovelful), we’d joke, “Oh weird, a rock!” Now that sensation is real.

There are several reasons that farming slowly leaked out of the Northeast and into other regions of the United States, but chief among them is the soil. The frontier presented a seemingly bottomless reservoir of fertility that intoxicated the young nation. As producers scrambled for this new potential out west, production on relatively inferior soil (coupled with noncontiguous and hilly acreage) dwindled. This encouraged an agricultural system in which food was produced at increasing distances from where it was consumed.

This of course is a dramatic simplification of the history of American agriculture. The point is that the soils of the Midwest, and the Central Valley of California and many other places, are on average more productive than those of New England, and this simple fact has shaped our entire food system. The point of the modern food movement, however, is that high productivity is not all that matters in the food system. Food does not exist in a vacuum; as Wendell Berry said, “eating is an agricultural act.” Every bite matters.

As small farms have again begun springing up in New England in response to this call for “food with values”, a fundamental problem was immediately clear: that pesky soil. Re-building a bank of soil fertility, after it had first been stripped of trees, then had its meager topsoil overgrazed and overworked before being abandoned, isn’t easy. One solution is to rejuvenate the old farmsteads that had not been quite so abused, or had not been re-absorbed by the persistent forest, and build from there. But only so many remain, and so understanding the principles of building soil fertility reigns over many other concerns. I was lucky enough to visit Eliot Coleman’s Four Season Farm in Harborside, ME a few years ago. In my memory, the farm sits directly on top of a rocky cliff jammed up against the ocean. (In reality, it was set further back, but you get the idea.) The soil is naturally very thin and rocky. And yet, when you come upon the farm, suddenly there appears a lush landscape, with soil that is thick and rich. The act of creating and enriching that critical means of production is necessary if you hope to grow food closer to where it will be consumed. It’s not easy, but it can be done and it is being done.

If I’ve implied by now that maintaining soil health in the Midwest is not important because the soil is already great, I promise that’s not what I mean. This is still a very important act, still central to sustainable production. The point is that this region has very different hurdles to overcome. So long as New England farmers can make something of the land, the enthusiasm for the product is there. Are all New England farmers making a killing, or even a living? No, but the notion of buying food from one’s region has been strongly embraced. For how much food is actually being produced in New England, the average consumer there seems far more prepared to buy it.

By contrast, the farms in Illinois that have decided to grow outside of the realm of conventional corn and beans appear like that one corn plant in every field that inevitably stands head and shoulders above the rest: awkward and undesirable (I’m so far in that I can’t even think of non-farm metaphors). For New Englanders, those farms that stick out in the Midwest are, in fact, the norm there. New England farmers might struggle with fertility, but unconventional Illinois farmers struggle with a problem of perception: “why on earth would you farm like that here?”

There is a different foundation that must be built here. Back home, that foundation was the soil. Here, it’s hearts and minds. It’s convincing folks that there are other important uses for the land. It’s encouraging other ways of thinking about our food. It’s introducing superior flavor, texture, and nutrition.  It’s showing by demonstration and education how food can be grown both productively and sustainably, and how focusing on diversity rather than uniformity in all things is good for us, the land, and the country. It’s making other kinds of farms visible and strong among the corn and beans.

Our approach is to train more farmers, to work hard to ensure their success. It’s not the only way to change the food system, but, like healthy soil, it gives us something to grow on. 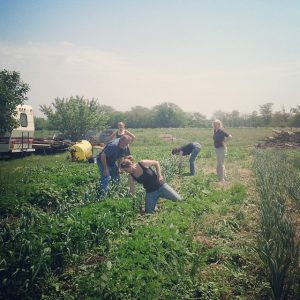 The Land Connection board members and staff help Shea Belahi do a little weeding while taking a break from strategic planning.