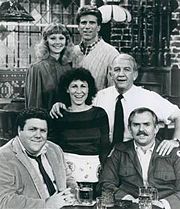 I started writing this blog post last week on the train to Chicago. I was intending to write about how I’ve started watching Cheers on Netflix, and how the closeknit social group on the show is reminiscent of what it is like to be part of the local food world in central Illinois. The show, for those of you who don’t know it, was on the air for 11 seasons, starting in 1982. The theme song’s catch phrase is “sometimes you want to go where everybody knows your name”. The reasons I started watching it are kind of flimsy – I finished all seven seasons of 30 Rock and was looking for a series with a long run but short episodes, and consistently light hearted. I also started watching New Girl, but that’s off topic.

But then I wound up sitting next to a favorite frequent library patron from my previous job, and while I did get plenty of work done (look for a blue icon with a link to our legal issues workshops coming to a Land Connection homepage near you!), I did not write my blog post. He’s someone I first met three summers ago while working for Stan Schutte and Triple S Farms at Urbana’s Market at the Square, right after I’d moved here and was working in the engineering library at U of I. I first met Stan in 2010 when I lived in Springfield, and somehow we became good friends (good enough that I went with to the Cochon 555 event in Chicago, where his heritage breed pig won!). When he spends a weekend in Chicago, he goes to mass at the catholic church where I went to grade school. Springfield is also where I realized my passion lay in local food rather than libraries. The way I usually tell the story is that I once went to the farmers’ market too early and got asked if I ever wanted to help set up in exchange for some vegetables, and ended up working for Garrick Veenstra for the next three years harvesting (Garrick is one of The Land Connection’s mentor-farmers, and was Terra’s brother Henry’s intern when he began to farm).. But it’s much more than that – I got involved with Slow Food there, and was for a while the co-convivium leader of Slow Food Springfield with Deborah Cavanaugh-Grant, who works for U of I Extension and knows literally EVERYONE. I lived down the block from Lindsay Record, from the Illinois Stewardship Alliance, and also knows everyone, everywhere. It’s kind of hard to explain how you know people when you know them from three or four different things, and that’s what the idea of a community is. 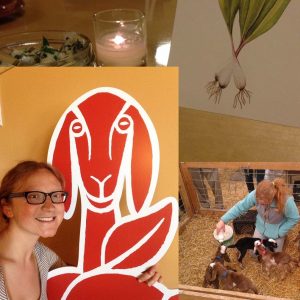 And when I moved to Urbana, I ended up volunteering out at Prairie Fruits during kidding season. It was the idea of my friend from high school, but she didn’t end up making it to volunteer orientation, and I ended up going nearly every day. That was where we had Ramp Fest last week Tuesday. It was supposed to be a friendraiser as well as a fundraiser, and I think it did highlight the sense of a community here – over half the people at Ramp Fest have some sort of close affliation with The Land Connection. Once it was over, though, it was a relief – the week or so leading up to it was a marathon of things to get done. But it was great and an amazing event and we are so happy for all the connections we made as a result (not to mention all the people who presumably saw ads for Ramp Fest but did not attend now know about TLC!).

Speaking of marathons, at Ramp Fest, I started chatting with one of our board members, Katie Kenney, and her husband, and somehow it came up that we were both running the marathon – and I ended up seeing her not once, but TWICE, on Saturday while I was running. And after the marathon, I went and did something pretty emblematic of life in the Champaign-Urbana community – climbed up on the alma mater statue. And yes, she does have a marathon bib number on. And it is 1867 (the year U of I was founded as a land-grant university). So I didn’t write the blog about community I was intending to, but I think that you get the idea. 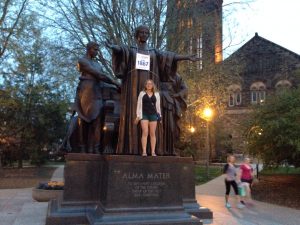