This week’s blog entry is from a guest writer. If you are interested in your article or blog entry being featured on the TLC blog, contact nicole@thelandconnection.org.

Exactly four and a half weeks ago I moved from Champaign to Stillwater, Oklahoma. It’s been a busy time, unpacking, getting my son registered and ready for school, trying to find grocery stores, hardware stores, my doctor’s office, and the DMV. Now that most of the boxes have been cleared away and I have a tiny bit of time to myself, I decided I should explore the finer points of my new hometown; for me, that means first and foremost finding local food at the farmers’ market. 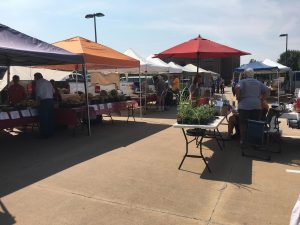 I first checked out the Stillwater Farmers’ Market website, and was thrilled to see that not only was the season longer than in Champaign, but also there were two market days per week, somewhat surprising for a town of 49,000 people. So, early Saturday morning I braved the already scorching Oklahoma sun to find out what was on offer. I pulled up to the parking lot of the Cultural Center, and was surprised to find a spot very close to the little grouping of white tarps.I tried to not be disappointed by the size of the market. After all, as we know, size isn’t everything. (Ahem.) I counted nine tables. Everybody looked hot, but smiling. The honey vendor was the first one I saw, with an impressive array of different flavors on display. Next were a few vegetable vendors with only a few small boxes of produce, mostly okra, cucumbers, zucchini, and melons. At the far end was a seller of baked goods, two meat vendors, and a burrito stand. On my left was a small table with some sunflower bouquets. I purchased a loaf of cinnamon-raisin bread, some chicken leg quarters (which ended up becoming a coq au vin for my husband’s and my anniversary dinner), two dozen eggs, and two melons. I was lured by their perfume; the flavor did not disappoint. I was, however, disappointed by the lack of tomatoes, which would be a staple right now in my hometown’s market. 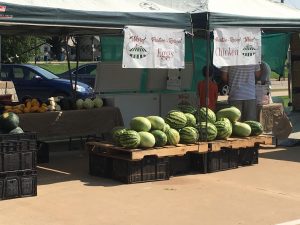 Stillwater’s market has potential, though; all the right ingredients are present. Entertainment? Check. A talented young woman ( in cowboy boots, of course) was singing and playing guitar near the market entrance. Variety? Check. For such a small market, I was pleased seeing everything from baked goods to honey to fresh produce. Ready-made fare? Check. No food truck, per se, but a stand selling hot burritos and fresh-squeezed lemonade seemed popular. And, most importantly, vendors seeking real connection with their customers? Check! My melon farmer explained to me the difference in his varieties, encouraged me to try one I’d never heard of with more yellow flesh and a distinct flavor, and told me to come back and tell him if I didn’t like it. That is the essence of a farmers’ market. Relationship.And for that, I will return to the Stillwater market, hopefully watching it grow. But I’ll admit, I’ve become completely spoiled by the abundance and quality of fresh goods in the Champaign farmers’ market. I do prefer slightly smaller venues; sometimes the Urbana market gets a little crowded and crazy for my taste. Champaign dwellers, consider yourself lucky to have such a fantastic mid-week market with such bounty and diversity. And enjoy the chance to make relationships with the vendors, because that’s what the market is all about: connecting Land, Producer, and You.

Joy Garling Prud’homme is a writer and Champaign native who recently uprooted and moved to Stillwater, Oklahoma with her husband, her teenage son, and her collie named Persimmon. You can find more of her moving adventures at champagnetostillwater.blogspot.com.