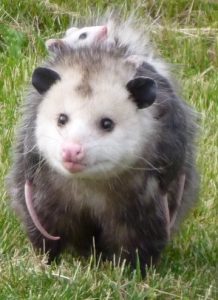 At our house, I prefer to keep a certain level of formality with the local wildlife.  So we have Mr. Possum, Mr. Toad, Mr. Earthworm, and so on.  I’m not sure why there isn’t any female wildlife nearby, but somehow it just works out that way.    To keep the gender balance fair, the bees are referred to as “the girls.” 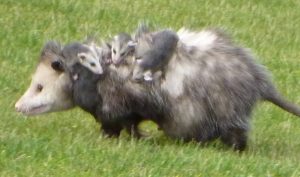 Today, I’d like to focus on one of our favorite local inhabitants, Mr. Possum.    We’ve had Mr. Possum for a number of years, so it’s probably Mr. Possum, Jr. or more likely, Mr. Possum, XVII.  I don’t like to think about the “other” Mr. Possums … you know, like the one that turned into Possum Soup in one of our large planters right before a large outdoor party, or the one that I had to mow around for several months until he was absorbed back into the earth … in my mind there is only one.  Even photographic evidence of Mr. Possum and his babies will not convince me otherwise.

Now, you’re probably thinking “why on earth do you like Mr. Possum so much?”  I love Mr. Possum because he keeps my deck clean. 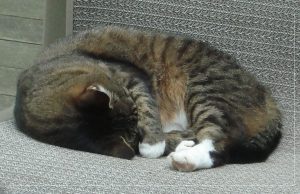 You see, we have this cat (you’ve seen photos of her before … in the How to Grow Cat Food post).  Contrary to the photo, Fuzzy doesn’t just lounge around all day .. well, she does lounge around all DAY, but once darkness descends she turns into a mouse killing machine.   As an added bonus, she leaves me the mouse heads and some of the insides (she really loves me a lot) … typically on the deck near the door.   Once you’ve had a mouse head stuck in your boot tread, you learn to look before you step, and really appreciate it when somebody else cleans the deck for you. 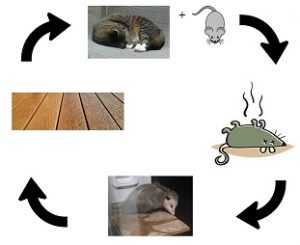 So, in this beneficial cycle we have going on here, Fuzzy kills mice to supplement the very fancy cat food I buy her.  She leaves some of the parts, which I have yet to enjoy.  Mr. Possum cruises over the deck every day or two and cleans up the leftovers (previously I spent a lot of time with the large dog pooper scooper).  It’s a win-win-win scenario.

In addition to the custodial assistance noted above, Mr. Possum helps to maintain a clean and healthy environment. He eats all types of insects including cockroaches, crickets, beetles, ticks, etc. He will also catch and eat mice (I think Fuzzy has him beaten here and he is stuck with the bits she leaves behind).    Possums are known as “Nature’s Little Sanitation Engineers.”  So, the next time you see a possum in the road, slow down and let Mr. Possum cross the road.  You never know what he’s doing to do on the other side, but it’ll probably be something worthwhile.