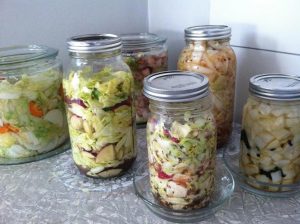 Fermentation is like life. Sometimes it’s good and sometimes it’s pretty awful and you don’t know why you waited around for a month to see what would happen with that jar of cabbage that you left sitting on the counter, only to immediately spit out the first forkful because it just seems like you might throw up if you swallow it. And fermentation is kind of magical – as is often misattributed to Benjamin Franklin, beer is proof that there is a god and they love us. Really, he said “Behold the rain which descends from heaven upon our vineyards, there it enters the roots of the vines, to be changed into wine, a constant proof that God loves us, and loves to see us happy.” But that’s kind of long for a t-shirt slogan.Actually, all it proves is that there are microorganisms and that they love us and want us to be happy. And also, more importantly, that they want themselves to be happy and eat all of the sugars in (insert name of any food here – cider, yogurt, sauerkraut, kombucha) and make them oddly tangy, fizzy, and a little bit more appealing to us.

Sure, whoever thought of actually eating some milk that had been left in the sun and somehow solidified *probably* shouldn’t have done that, but the worldwide popularity of yogurt, or kefir, or any one of a multitude of fermented milk substances of varying liquidness and tartness shows that, in many places, many times, over the course of the last several millennia, someone thought this was a good enough idea to figure out how to do it on purpose.

And the same thing goes for eating fruit that’s a little overripe and starting to be fermented, or the bowl of bread dough that gets left out to raise. It’s those wild yeasts and bacteria that we, maybe a little accidentally, domesticated and put to work for us.

Kombucha is one of the most resilient, hardest to mess up, best starter fermentation projects. An ethnically Russian drink, it’s incredibly easy – a cup of sugar boiled in a gallon of water, add a tea bag, let cool. Then, the hard part: adding the starter. Called a scoby or a mother, this is a whiteish, almost rubbery-textured glob that turns the sweet tea into kombucha, and is just like adding yeast to bread dough. Bottled kombucha at the store will have something that looks like a jellyfish in it, which might or might not work, but the best way is to get it from someone who has an active kombucha brewing cycle. The one I have I got from someone who got it in 1996. Let sit at room temperature for 5-10 days, and then start your next batch to ferment while you drink that one, putting the scoby into the new batch. If you let your friends try it, some of them will turn down all beverages at your house forever after, and some will become kombucha evangelists.

One of my first experiences with intentional fermentation of raw vegetables was using a book called “Wild Fermentation” by Sandor Ellix Katz. He more recently, published a tome on all sorts of fermentation practices around the world called “The Art of Fermentation”. So if you’ve ever wanted to have African fermented millet porridge, or to know the science behind how any number of different societies use fermentation to preserve food, have I got a book for you.

But back to the story. “Wild Fermentation”, despite the color scheme reminiscent of Y2K (published in 2001), and a sad lack of glossy, fancy photos like many modern cookbooks, was the first guide I used, alongside a friend who had already experimented with fermenting all sorts of things. We had a variety of cabbages, carrots, daikon, turnips, and other sturdy vegetables and spices.

It’s remarkably simple – chop things, sprinkle them with copious amounts of salt, pound/squish/massage until they’re sitting in their own juices and then pack into jars to ferment in for however long you want. Really, it’s hard to oversalt something you’re going to leave sitting out because the salt acts as the preservative, and that salt and vegetable juice is the brine that all pickled things need.

And it’s basically done. Just watch every day and scoop off anything funky on the top, and make sure it all stays submerged (weight it down with a smaller jar or other clean glass object). And you can start eating it after just a couple days. The cooler the room, the slower it will ferment. If mold grows, just remove it. Like that container of leftovers forgotten in the back of the fridge, you will know immediately upon tasting it if it’s a good idea to eat or not.

This is a much more complete version of this recipe.

However, I find that I enjoy the act of chopping, salting, smashing, and watching my jars ferment a whole heck of a lot more than I do actually eating them. It’s not to say they aren’t delicious, and brimming with good, probiotic, wild bacteria, I just have a hard time working them into what I cook.

That reminds me, I have a batch of kombucha to brew.