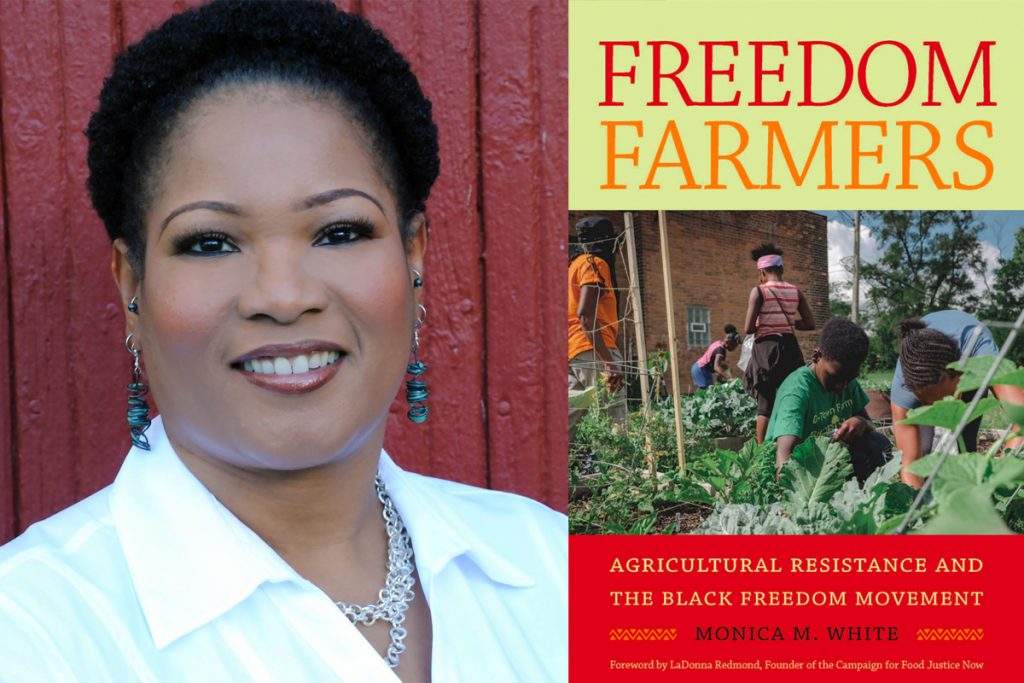 Over the past year, The Land Connection’s staff has chosen to spend some of our staff meeting time as a book club. Having sat through many hours of staff meetings at this office, it felt time to shake up our standard format. It was also clear in 2020 that, as a white led organization, we all had work to do learning about systemic racism.

Freedom Farmers expands the historical narrative of the black freedom struggle to embrace the work, roles, and contributions of southern black farmers and the organizations they formed. Whereas existing scholarship generally views agriculture as a site of oppression and exploitation of black people, this book reveals agriculture as a site of resistance and provides a historical foundation that adds meaning and context to current conversations around the resurgence of food justice/sovereignty movements in urban spaces like Detroit, Chicago, Milwaukee, New York City, and New Orleans.

This book sparked many conversations in our office about the rural south that the majority of us had little history of prior to reading. As mentioned in that brief description, most of the history we know of African American farmers is rooted in oppression, slavery, sharecropping, land theft, and tenant farming. We don’t talk about the relationship between labor, land use, and the black farmers that truly built the foundation of the agriculture sector of the United States of America. This book shifted our staff’s mindset to the latter, creating new spaces for us to explore.

One of the biggest takeaways for our staff was around the book’s biggest theme: collective agency. Monica White writes using the terms collective agency (a term White coined) and community resilience throughout Freedom Farmers. Of collective agency, she says, “A community does not have a consciousness in the same way an individual does, but when a group of people comes together and believes in their mutual success, this creates a separate type of consciousness that drives collective agency.” The thought is that those who join movements go through a transformation where they give up the individual rewards of status within our accepted social hierarchies to find rewards in movement participation. As a staff we spent time talking through how this looks and feels in our current society and, specifically, through our work at The Land Connection. It wasn’t a great realization to our staff that decades after the Freedom Farm Cooperative and North Bolivar County Farm Cooperative, we were sitting through this moment in history where the same challenges were at odds with each other and, collectively, we have not built the community needed to move forward. Something that seems so obvious, but so far from reach.

The deep conversations around community and collective agency were sprinkled with smaller learnings that each of us experienced throughout the book. Some of our staff learned that Head Start, a federal program in the US to provide universal access to emotional, mental, and social support through education, health, and nutrition services to preschool students of low socioeconomic status families, actually got its start with the Freedom Farm Cooperative, which was selected to serve as a site for one of region’s first Head Start programs. Some of us learned that George Washington Carver, yes that same father of the peanut industry, was also the only black man in the country with graduate training in scientific agriculture during this era. What we realized is that most of our understanding of Carver is as a scientist who overcame adversity. What we didn’t realize is that he wasn’t simply working to grow the demand for organic and locally grown food, but was instead using his scientific commitment to agriculture to address food security and build the economic self-sufficiency of African American farmers.

There was so much to take from the 150 pages of this book that I could write pages of our conversations and learning. Having appreciated this time together as a staff, we have decided to tackle another book later this summer — Farming While Black. Stay tuned for some takeaways from that experience. And, if you’re interested in reading along, let us know!