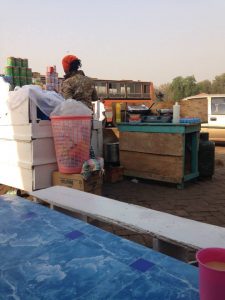 While I was on vacation, I made an effort to only eat local cuisine – or at least I tried. The typical breakfast was an omelette, with tomato and onion, either next to toast or as a sandwich. This would be accompanied by a mug of instant coffee (always Nescafe classic) with milk, or more usually, sweetened condensed milk, and cubes of sugar. My friend would have tea, which was usually Lipton, and the same sugar-milk combination. The best omelette-sweet coffee we had was in the northern capital of Tamale (pronounced without an emphasis on any syllable, not the same as the Mexican word tamale). These were cooked by a woman using a single burner at the bus station. She scrambled the eggs in a bowl and then fried them in the pan – she also toasted the bread in the pan. We ate them sitting at a low table on wobbly wooden benches. The first day, we were waiting for a bus to Mole National Park and talked with a pair of travelers who had come from there. On the return trip, we had the same breakfast after leaving Mole at 3am and arriving back in Tamale around 8am. 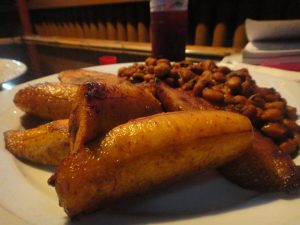 Another popular food on the street was fried plantains – served either alone or with some spicy red sauce made with tomato puree and palm oil. There were sometimes plantains that had just been peeled and roasted over a fire (those were definitely healthier than the oily fried ones… but not quite as tasty). It was also very easy to get bananas – a bunch would cost the equivalent of $1. At one point midway through the trip, I realized I hadn’t had a non-banana or plantain based meal for two days and decided to cut myself off.

Banku was something. It’s made from either ground up cassava root or ground corn (or a mixture) and then soaked in water and lightly fermented. The result is then steamed and sold in teardrop shaped pieces – on the street, and even in some restaurants, these would be in plastic baggies. You eat it by pulling off a chunk and dunking it into whatever the accompanying sauce (always including tomato puree, palm oil, something to make it spicy, and some vegetables like onions), and then putting that into your mouth. With your hand. There would be pitchers of water and soap and a bowl at the table so you could wash your hands before and after eating. Some of these would include pieces of meat in the sauce. 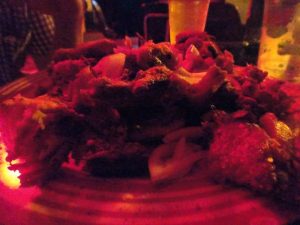 On a Sunday night, we had just gotten into Kumasi, the second largest city in the country, and were looking for dinner. Nothing seemed to be open, and, oddly, there weren’t people selling food (or anything) on the street. We walked around the mostly deserted neighborhood and found a bar that was open. They said they didn’t have food. I’m not quite sure what to call the man who had a grill set up with pieces of meat on sticks and chickens, but needless to say, that roast chicken chopped up with raw red onion and topped with a dusting of spices and probably MSG went great with ice cold cider (it was a hard cider from South Africa that I had drank in Namibia – I kept seeing ads for it and this was the first time a bar had actually had it).The quality of the seafood was amazing – I ate a lot of white fish (probably tilapia, which is indigenous to Lake Volta in the eastern part of the country). It was usually served with a raw diced tomato, onion and cabbage topping and fries or rice or banku. There was also the night I ordered a lobster and got two relatively small ones, which were delicious and reinforced that lobster is my least favorite crustacean.

By the end of the trip, the thrill of eating incredibly fresh, locally grown mangos, bananas, pineapples and coconuts on the street was *almost* starting to wear off. Until I came back to Central Illinois and remembered it’s still winter. 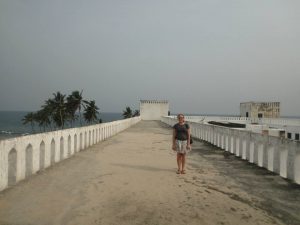