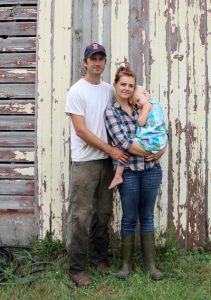 Both Marty and Crystal Gray grew up on farms, but it wasn’t until they left and were living and working in the suburbs of Chicago that they realized they wanted to to be closer their family, and to try farming as a business. But even though they had talked about it, they were not sure how to begin, partly because the kind of farming they wanted to do was very different from the conventional farms they had grown up on.As unsure as they were, it seemed like the universe wanted them to farm too—and that message came to them loud and clear, right through the radio, in the form of an interview with The Land Connection’s Terra Brockman, who was talking about Central Illinois Farm Beginnings.

The Grays ended up enrolling in Central Illinois Farm beginnings, which was located in Decatur at the time. They used their time driving from the suburbs to class to talk and dream about their future farm. After completing the business planning part of the class, Marty spent a year working with their mentor, Jon Cherniss from Blue Moon farm in Urbana, Illinois. When I asked Marty to talk about his mentorship, a big smile came across his face and he said “We’re good friends now.” Then he went on to explain that when Jon realized that Marty was serious about farming, he pushed him hard, and taught him a lot, not just about production, but about all of the boring financial work, the marketing, and that he needed to realize there are a lot of unknowns when you enter into farming.

The following year, with a business plan in hand, and a year of on-farm experience under their belt, the Grays started their own diverse vegetable farm, Gray Farms Produce. They grow a wide variety of vegetables, including heirloom tomatoes, and a lot of different potatoes, but their niche is specialty greens. Marty pointed out that having variety in what they grow has been helpful with the ups and downs of farming—particularly with the weather challenges that they have faced since they began. “It’s been something every year, either drought, hail storms, too much rain in the spring, and the incessant wind.”

In addition to their 60+ member CSA, the Grays sell their produce at farmers’ markets. After trying different markets around the state, the Grays settled on the Kankakee Farmers’ Market, and the Division Street Market in Chicago. Marty attributes their success at the market to their unrelenting focus on quality and beauty, “There is nothing better than packing the truck and going to the market, you sort of have a blank palette to paint with your vegetables—that’s the best feeling in the morning, and we have drawn a lot of people at the market because it is an artful kind of approach.” That, and the personal service. “I know probably ¾ of the people’s names who come to our stand at the market. I know their story and they know my story, and we get to meet up every week and see each other and discuss how their meals went, and that is just a really nice feeling.” Marty and Crystal also post a video of a cooking demonstration that they create each week that features ingredients that CSA members will find in their share, and market goers will find at the market stand. 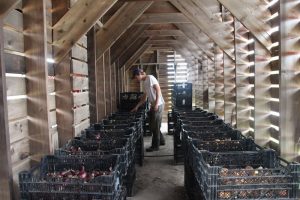 The greatest satisfaction for Marty, however, comes from farming his family’s ground, “ I find relics in the field my grandpa and great-grandpa farmed. I’ll find pieces from tools and wagons, and I know that they have been there since the last time they were working–that’s just amazing.”As they enter their sixth year of production, and are now themselves mentors for Farm Beginnings, I asked Marty what his plans are for the future. He started to describe his plans for expanding production, and for increasing the number of families that he serves in their CSA, but then he paused and said, “but even more important than that, my absolute dream for the future is to bring my family on to the farm and to have my brothers farm this ground with me, and for that to happen it seems like the stars will have to align, and then realign, and then align again…”

You can learn more about the Grays on their website: Gray Farms Produce, or on their Facebook page. They are also featured in the 2014 Land Connection Calendar.