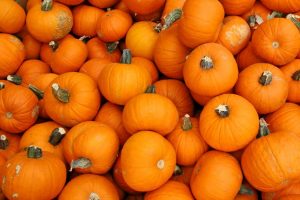 I have been a resident of Illinois for seventeen years. In that time I have driven from the top of the state to the bottom and everywhere in between. And in all of those miles, I somehow believed that Illinois was simply known for their soybeans and corn. These are technically the largest crops produced in the state of Illinois, but since starting at The Land Connection a few months ago I have realized that we are doing a lot more than just growing acres upon acres of corn and soybeans. And because I truly believe I cannot be the only person who didn’t know the neat things Illinois is growing, I am devoting this edition of Grow With Me to exploring a handful of important Illinois specialty crops… and also embarrassing myself a little in the process I’m sure!

Did you know that Illinois grows more than 90% of the pumpkins used for processing in the United States? I knew we had a lot of pumpkins here, but I had no idea we were growing almost the entire nation’s production needs. Tazewell County, home to Morton, Illinois (or as they call themselves the “Pumpkin Capital of the World”), is where the largest number of pumpkins are produced in Illinois. In fact, 80% of commercially produced pumpkins are grown within a 90-mile radius of Peoria. It’s amazing to think that when someone on the other side of our country opens a can of pure pumpkin for use in their fall pies, they will likely be eating pumpkin from our state.

Somehow, despite growing up in a house that was always eating horseradish and was located less than an hour from the “Horseradish Capital of the World,” I had no idea that Illinois produces 85% of the world’s horseradish. That’s the entire world, not just the United States. Horseradish is primarily grown near Collinsville, Illinois where they even hold an International Horseradish Festival each June. This area of Illinois is great for growing horseradish because the soil by the Mississippi River is rich in potash (a potassium compound), which the root apparently loves. Also, many years ago, there was quite a bit of sulfur runoff coming down the river from industry. Sulfur is needed to give the horseradish its heat, so this area was an ideal home for horseradish to take root. Nowadays there isn’t much runoff (thank goodness!) and farmers instead add sulfur to the soil.

I hope I am not the only one here that didn’t realize popcorn is its own variety of plant, which is different than sweet corn or field corn. Can I see a show of hands? Anyone? Anyone? I just keep picturing an entire field exploding into fluffy little popcorn bites because it was too hot one day. Apparently that can’t happen, though. Sad! Getting back on track now…

Illinois is the third largest grower of popcorn. It’s even our state snack food! If you are like me and have no idea how to identify a popcorn plant, the difference is that a popcorn plant has a tassel on the top that is a bit floppier than sweet or field corn. So how does popcorn work? The farmers let the corn and husk dry out as much as possible in the field. They then bring it indoors, remove the husks, and let the ears continue drying. Once the kernels reach a certain moisture percentage, they are ready to pop. Each kernel contains a small drop of water that suddenly expands when exposed to high heat. The kernel turns inside-out as it explodes and the steam inside is released making the popcorn pop.

This one was a bigger shock to me than expected. I knew watermelon was a big deal in Illinois, but I always separated out other varieties of melons (honeydew and cantaloupe) and reasoned that they needed months of heat and moisture to grow. That couldn’t be in Illinois because we have the strangest and most unreliable weather at times, so it had to be somewhere south! It seems our weather, especially in southern areas of the state, is fine enough and that the sandy soils of the Illinois River Valley are great for not only growing pumpkins, but also melons! While Illinois doesn’t quite make it into the top melon producers in the country, we do have at least one city claiming to be the “Watermelon Capital”… Beardstown, Illinois. Maybe they are just the watermelon capital of Illinois?

Well, there you have it. Illinois is known for far more than our acres of corn and soybeans. Even if you haven’t noticed the popcorn plants or the miles of pumpkins hiding behind the corn and soybeans, they are there. Keep your eyes peeled!

Thanks to the Illinois Farm Bureau and University of Illinois Extension Office for providing me with the information I needed to better understand what is happening with specialty crop production in our state.