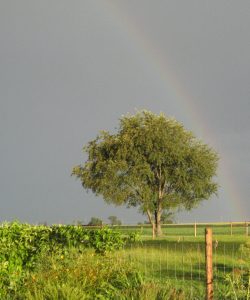 Like many farmland inheritors, Kris McIntosh and her sister Kathryn knew next to nothing about farm management when they took over the land that has been in their family for more than three generations.Both sisters have families and jobs some 150 miles from their central Illinois farmland, but they nevertheless wanted to figure out what their options were. If possible, they wanted to find a way that the land might better embody their core values of protecting and enhancing the soil, water, plants, animals and community, ensuring the best possible health and mutual benefit for all.

Kris had begun her professional life as a high school math and science teacher, and had then moved into adult education and training, specializing in experiential or problem-based learning. Her problem-solving abilities came into play when she decided to more actively manage the family land that she and her sister had inherited.

She began the process by speaking with her financial advisor, who recommended she meet with someone at The Land Connection. At the initial meeting, Kris sketched out the 80 acre parcel, its road frontage, and the grass waterway that runs through it.  She talked about her goal of having the land reflect her environmental values, as well as contribute to good local food production in an area that is virtually a food desert.

As the conversation progressed, it became clear that the McIntosh sisters are part of the growing number of women inheriting land and wanting to take the long view rather than look for short-term gains. According to the USDA Census of Agriculture nearly one-half of all farmland in the U.S. is owned or co-owned by women, with an even higher percentage for leased land. According to the Women Food and Agriculture Network, whether women lease their land or farm it themselves, they tend to bring a strong conservation and stewardship ethic to managing their land, seeking to transition their land in ways that will enhance water quality, protect soil health, and yield other health benefits to the environment and to people.

Of course people (women and men) who inherit farms but will not be farming them often need help clarifying their values and goals, and then getting the information and support they need to evaluate different options, and to become good managers and stewards of their land. To assist such people, The Land Connection started a farm transition coaching program and Kris was one of the first to participate. (The Land Connection also offers Farmland Transition Roundtables for people just starting to think about a farm transition or succession.)

As the conversation between Kris and her coach progressed via emails and in-person meetings, a plan evolved.  The first step was an in-person meeting with the existing long-time tenant and his wife to broach the possibility of putting the acreage into organic hay.  At that meeting , Kris and Kathryn found their tenant farmer to be very knowledgeable about the 80 acre parcel of land that he had farmed for three generations of the McIntosh family, under the same handshake agreement.  Although the tenant farmer likely grew up at a time when livestock and a diverse rotation that included hay and small grains (wheat or oats) were part of every farm, he was candid with Kris and her sister, stating that he was not interested in planting the acreage in hay or farming organically.

However, he was happy to work with the sisters to achieve their long-term goals.  The sisters found that he was particularly excited about habitat preservation, and he suggested putting the low-lying areas where water naturally flows into the USDA’s Conservation Reserve Program (CRP), and planting prairie grasses and forbs that would absorb run-off and also be a good habitat for pheasants and other birds.

Kris followed up and contacted Brian Anderson, the biologist for McLean County Pheasants Forever, and they worked toward a plan to spring-seed the areas and take them out of the conventional rotation.  However, because of the delay in the passage of the Farm Bill, the acreage did not get registered in time, and so won’t be enrolled in the program for another year.  Another setback came about when the house of a neighbor farmer who the sisters sought to plant the front 12 acres in organic hay burned down, and the personal tragedy turned into another delay.

Although Kris and Kathryn were disappointed that they were not able to put a quarter of their land into organic hay and wildlife habitat in 2014, “the good news is that we have a much better relationship with our farmer, and he is willing to help us with the CRP program, and we have someone who we know would like to help us put the front 12 acres into organic hay. So while the farm may not look like it’s changed over the past year, I’d say we’re still in a better position for the future than we were,” says Kris.

“We trust our farmer,” she adds, “but we wanted to make some changes and didn’t even know how to begin. Without Terra’s help, we would probably be in the same position we were for the past 10 years.”

Now Kris and Kathryn have a plan and are on their way to implementing it.  Along the way, they continue to make connections to resource people who will help them reach their goal of having their farmland embody their core values of caring for the land and for people, ensuring the best possible health for both.