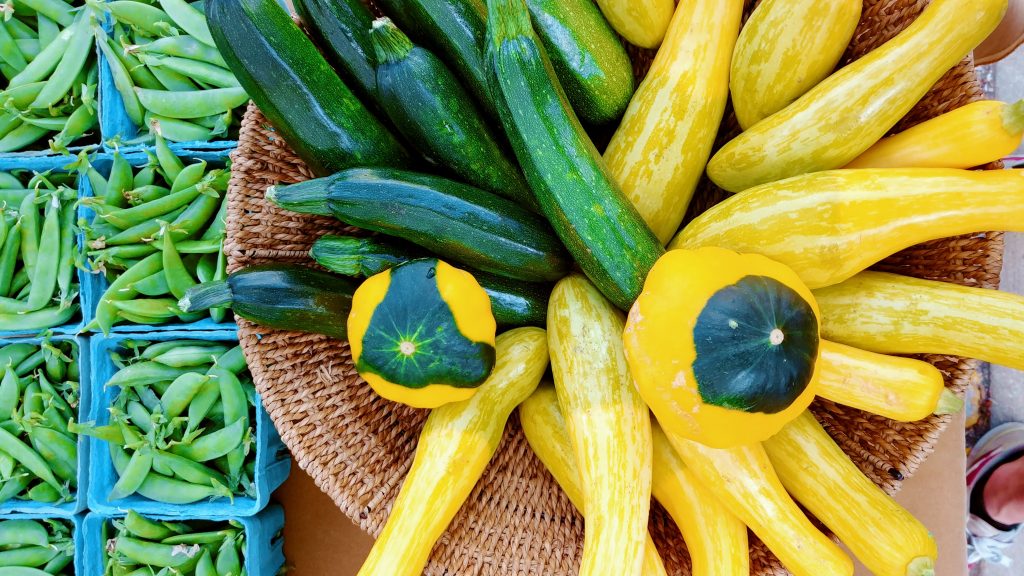 When those adorable little pattypan squash start to appear at market booths I get all excited. The 5-year old in me just wants to play with them. I’ve heard them called jellyfish, flowers, anemonies, and “mutant hands” by kids at the market. All of the above names I think are appropriate and adorable. While many vegetables are weird looking, pattypan squash, in my opinion, has the unique distinction of being both weird looking but always cute. I think it has to do with the undulating curves of the squash. Kohlrabi looks weird, but many kids find them menacing instead of cute when the leaves are still attached.

Unfortunately, for other summer squash varieties, they are not as cute. They are equally delicious, and typically preferred to pattypans, but just not as cute or interesting. To be fair, it is much easier to create zoodles from zucchini than it is from a patty pan. Plus, weirdly shaped vegetables tend to illicit the comment “but what do I do with it?” All summer squash can be prepared in similar ways, you just have to use different techniques to break down a pattypan than you would a yellow squash or zucchini. But understanding that they are similar can sometimes dispell people’s resistance to trying something that looks weird or outside the norm. There are lots of different summer squash varieties that you’ll see at farmers markets, some will look weird and some won’t, either way, I encourage you to try some new ones out over the next few months.

Now that summer is here, markets will begin exploding with summer squash. The arrival of tomatoes, summer squash, peppers, and eggplant at farmers markets is a signal to everyone that it’s gotten hot and summer is setting in. So let’s get comfortable and figure out what to do with all of the summer squash that we’re about to be inundated with.

Summer squash varieties tend to have a bushy growth habit, unlike the rambling vines of many winter squashes, and the plants can get quite large so be careful to give them enough room in your garden if you want to grow them. Summer squash varieties include zucchini (yellow and green), pattypan, crookneck, straightneck, tromboncino/zucchetta, and Aehobak (Korean zucchini). There are other varieties of summer squash like Cousa squash and immature loofa gourds, but we won’t really be talking about those here.

Winter squash, on the other hand, is allowed to mature before being harvested and therefore has a thick rind and can be stored for a while in cool conditions thereby making it a winter squash. Or, maybe it’s because winter squash is harvested in the fall and stored through winter. Maybe I’m just being too cynical and suspicious. I found many of the reasons why the differentiation to be overly complicated, but they very well could be right. To me calling something “Summer Squash” because it goes bad faster than “Winter Squash” which lasts longer just seems a little…off. Anyhow, I gave you the basics and key differences so let’s keep going.

Summer squash can be found in a variety of shapes and colors. Pattypan or scallop is round and flattened like a plate with scalloped edges, usually white, but sometimes yellow or green. Constricted neck is thinner at the stem end than the blossom end, classified as either “crookneck” or “straightneck” depending on if the stem end is straight or bent, and is usually yellow. Cylindrical to club-shaped Italian varieties, such as zucchini, cocozelle and caserta, are usually shades of green, but can be yellow or nearly white.

Although nutritional values vary between varieties, summer squash is typically about 94% water and very low in calories. It is a great source of vitamin A, vitamin C, potassium, and calcium. The peel is where many of the nutrients hide, so never peel summer squash. Summer squash is easily digested, nourishing, and cooling. It also replaces lost fluids so it can be a welcome summer staple that hydrates you while you eat it. That being said, because summer squash is immature, they are considerably lower in nutritional value than their winter counterparts.

When buying summer squash remember that unlike winter squash, it is harvested at the immature stage. Ideally, you should look for summer squash should be 6 to 8 inches in length. Pattypan and scallopini are good to buy when they measure about 3 to 4 inches in diameter or less. Tiny baby squash are delicious too. Slightly larger squash are still usable, especially for soups, bread, or stuffing. Large rock-hard squash, on the other hand, serves a better purpose on the compost heap than in the kitchen.

Summer squash dehydrates quickly. Store unwashed in a plastic bag or in a hydrator/crisper drawer of a refrigerator for up to 1 week. Wash just before preparation as water droplets can promote decay of the skin and flesh during storage. Because the fruits are harvested when still immature, they bruise and scratch easily. Handle with care and use immediately after purchase. Damaged or bruised squash will deteriorate quickly.

For long-term storage, cook and puree summer squash and freeze in air-tight containers for future use. It is a particularly good a base for winter soups. Canning is not recommended because the tender summer squash will simply turn to mush during processing unless you are making pickles. Zucchini can be substituted for cucumbers in some pickle recipes. The results are especially good in one’s favorite recipes for Bread and Butter Pickles. I, personally, am not a fan of B & B pickles, so this would not be my first choice, but it seemed to be a common enough comment to warrant inclusion.

It is fairly easy to prepare summer squash. Rinse and wipe down summer squash if needed. There is no need to peel any varieties of summer squash, assuming that you didn’t buy the largest squash you could find because that will affect the flavor, flesh, and skin, and as stated before should probably just go to compost. Most people will then trim the top and bottom of the zucchini off, though you really don’t have to.

The reason I started this blog talking about pattypan squash is because people seem truly confounded when they see them. They’re squash but oddly shaped squash. People realize that they need to remove the “poles” of the pattypan, but aren’t sure if that’s all they have to do. My word of advice is either stay the course and just cut the top and bottom of (this might waste a bunch of the squash) or do what I do and treat it like a tomato. Use a paring knife to incise the top and bottom (i.e. cut a circle around the part you want to remove at an angle to remove a cone of the squash). That’s my way of dealing with patty pans.

Raw – cut the squash into slices or sticks and have with hummus or dip, grate and add to green salads or slaws, slice thin and put on top of pizza, or cut thick slices or cubes and add to soup at the very end to retain texture.

Steaming – keep squash whole or halved to retain texture and cut into 1- to 2-inch pieces. Place in a pot with a steamer basket over an inch of boiling water and steam for 10-15 minutes. Thinner slices or smaller cubes should only be steamed for 5-10 minutes, or until tender. Top with butter, lemon juice, salt, pepper, or parmesan (or all of the above).

Roasting – slice squash in half lengthwise or into thick slices or wedges, toss in olive oil, salt, and pepper, spread out on a baking sheet (cut-side up) and roast at 450°F for 15-20 minutes.

Grilling – cut in half lengthwise, drizzle cut-side with olive oil, salt, and pepper and place cut-side down on the hottest part of the grill for 3-4 minutes, then move to the edge/cooler side of the grill and cook for 8-10 minutes. Slice and add to kebobs on the grill.

Baking – summer squash is fine baked on its own, but it can be a little boring. Instead, try blanch slices (place slices in boiling water then into ice water after about 1 minute to halt the cooling) and layer casserole-style (2-3 layers of each) with onion and seasoned bread crumbs, tomato cream sauce, or other vegetables. You can even go for ratatouille with Asian eggplant, bell pepper, and potato. Bake at 350°F for 15-20 minutes (or until hot and bubbling).

Stuffing – steam whole pattypan squash (top removed) or halves of other squash varieties. Cut in half lengthwise and scoop out the center and seeds. With pattypan squash cut the top off then scoop out the center of the whole squash like you would a bell pepper. Stuff the squash with your favorite filling, and bake at 350°F for 15 minutes, or until the squash have started to brown slightly and are fork-tender.

Eating Light – 111 Ways to Use Zucchini and Yellow Squash