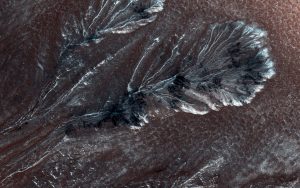 This week, Pope Francis visited the United States and continued to breathe hope into an institution that had become increasingly fixated on social issues while also fighting publicly with its own demons. The pope has seized his role back from that of administrator and figurehead to one of advocate, one who speaks for the poor and marginalized, and he continued this mission while stateside. His most profound declarations, however, came on the subject of climate change. He excoriated leaders here and of other powerful nations for their inaction in the face of a crisis that may already be past the point of rescue. These sentiments, that we are breaking our planet’s life support systems in a way we may not be able to repair, are not new. We can now only hope that that message, delivered from one of the world’s most influential voices to some of the world’s most influential decision-makers, will spur action to mitigate the consequences of our actions.

Also this week, NASA declared the presence of water on Mars. Never minding that the water is salty and only flowing seasonally, this discovery starts a timer counting down to the moment we find biological activity there…or to the moment humans first touch down and begin planning settlements. It cannot be denied how incredible such a feat would be. Imagine desalinization plants pumping water into hydroponic systems that feed a team of biologists working to understand cellular life on a different planet, perhaps paving the way for others to travel there and begin a human society. Would we invade with all the horrors of our past colonization, with destruction and exploitation and ignorance? Or might it remain an inhospitable scientific outpost like Antarctica?

The third possibility, of course, is that we don’t give ourselves a choice. Around the same time that living year-round in Antarctica has become almost comfortable, we will have scorched the rest of the earth and our species survival will depend on the surface and climate of another planet. This is our current trajectory, and it’s sobering. Perhaps we can pull it off. Perhaps we can make a life on Mars. Perhaps that’s all we have to hope for.

But the reality is that we do still have choices, and we still have resources to use. Our soils offer a massive sink for all the carbon we are yanking out from deep in the earth and expelling into the air, and the sun provides more free energy than we could possibly discern how to utilize. Given these options, and a looming crisis, we can accept that our house is burning and attempt to move into the empty house next door, or we can respect what we have and fight this fire while there is still time.

Let’s not give up so easily. Whether we view ourselves as kings, stewards, or one more animal species, this is our home. It’s a home worth fighting for and perhaps the only one we will ever know. Let’s fight for it in our daily actions, in our words, and in our works, and be stubborn in our love for this planet. Let’s dig our heels in, down into the earth.