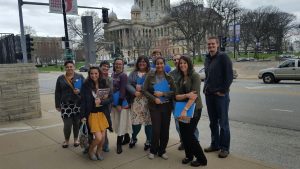 About a month ago, Sarah and I headed down to Springfield to join the Illinois Stewardship Alliance for their annual Local Food Lobby day at the state capital. Neither of us had ever attended a lobby day event or attempted to lobby for a cause before, so of course, we spend the hour and a half drive discussing seed libraries, co-ops, the SNAP for farmers market program, and whether we thought we should have worn comfortable or fancy shoes. 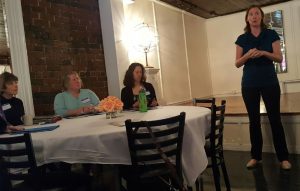 When we arrived at the beautiful Arlington Restaurant, we were greeted by Dee, the Lindsays and Rebecca, and directed to our seats. There were 20-30 people there, grouped by legislative district and we learned that we would be going after the senators and representatives in teams. After introductions, Rebecca gave us a deeper overview of the bills that we would be lobbying for. It was an extremely educational experience, giving me a deeper insight into the particularities of the legislation as well as some arguments legislators might have for not supporting legislations which to me, seemed universally agreeable.For example, we talked about a bill that would exempt seed libraries from the regulations that big seed companies are subject to, including excessive and expensive testing of the seeds that they distribute. These regulations would be impossible for seed swaps and seed libraries to comply with, and seem wholly unnecessary considering how small these operations are. In most seed swaps and seed libraries, seeds are shared between community members and neighbors from produce that they have grown in their own backyards. The seeds are shared in the truest sense and no financial transactions are involved. However, big seed companies are pushing back on making this exception, seemingly because they see community seed swaps as infringing on and threatening their product and business. 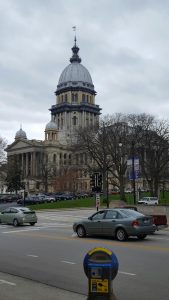 After the rundown of the bills and a tasty, local lunch, we headed over to the capital, broke up into our teams and started seeking out the legislators on our list. The capital is a big, confusing, and not intuitively laid out building, and we spent a lot of time asking for directions but we were able to catch a couple of senators in their offices. I was surprised at how easy to talk to, and how willing to listen everyone that we spoke with was. Even when the senators were not available, their assistants were happy to chat and hear out our pitch and our personal stories about why local food was so important to us and to the state. In fact, most of the people we spoke with were just as if not more excited to talk about farmers markets and gardening as we were (and everyone loved the basil seed packets we were handing out!).Overall, the lobby day was a fantastic experience. Despite being nervous and embarrassed to basically barge into the offices of Illinois elected representatives, I found it very easy with the guidance of ISA and the knowledge that it is the job of our senators and representatives to listen to the people of Illinois. After the first one, it was easy, especially because I was talking about a topic I care about, creating a strong local food system. Thanks so much to ISA for facilitating such a great workshop to empower normal citizens to do their political duty and tell legislators what they believe in!