In the sustainable farming and farmers market community, we’ve all been watching the developments surrounding the 2018 very closely. Last summer, both Mallory and I had the opportunity to speak at a House Ag Committee listening session at the Farm Progress Show in Decatur. Together with a coalition of local food advocates pulled together by the Illinois Stewardship Alliance, speakers who were called up had two minutes to address House Ag Committee Chair Rep. Conaway and 7 other members of the commitee, including 3 Illinois representatives (Mike Bost, Cheri Bustos, and Rodney Davis). Mallory spoke about the importance of Farm Bill programs that support the training of new farmers, and I talked about the huge impact of the Farmers Market Promotion Program (FMPP) on a market such as ours, and on the importance of programs that support and boost SNAP access at farmers markets. 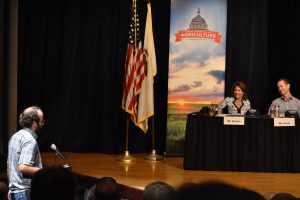 We watched this spring’s vote on the Farm Bill carefully, as the House version eliminated virtually every conservation and local food program we hoped to save. The Food Insecurity Nutrition Incentive (FINI) program actually received an increase in funding, a small beacon of hope for this program that has helped fund SNAP matching programs to help low-income families afford fresh produce. But it wasn’t all good news for SNAP, as the House version of the bill also seeks to impose stricter work requirements (despite the fact that work requirements in order to receive SNAP already exist–don’t let current rhetoric make you think they don’t!), which analysts predict could result in millions of SNAP recipients losing their benefits. While there was a brief moment of encouragement earlier in the month when the bill did not pass the House (although the defeat was due more to political manoeuvering related to immigration, rather than actual objection to the content of the bill itself), however sadly the bill passed the House last week, much to our dismay.

So what happens now? There’s still hope! The Senate version of the Farm Bill in still in the works, and it’s been crafted in a much more bi-partisan manner. Some details have been released, and although they’re being restructured and renamed, many of the programs that support local food, sustainable ag, and new farmer training look safe.

And what can you do? If you believe in the work we and so many other organizations and farmers are doing to build a sustainable local food system, continue to put pressure on your representatives. Once a Senate bill has passed, the two will need to be reconciled. Call, write, or email your senators and representatives, and urge them to support the Local FARMS Act, which will help ensure the lasting power of programs that will help us support small farms and eat better food. 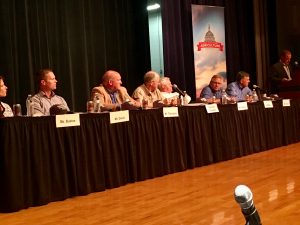