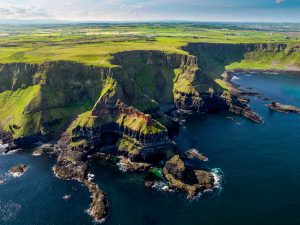 Happy post-St. Patrick’s Day everyone! As a proud Irish-American (I have my family crest tattooed on my back) I just want to take some time to point out some misconceptions about Ireland and St. Patrick’s Day.

1: Four-leaf clovers have nothing to do with St. Patrick. They are symbols of luck and have more to do with the fairy Leprechauns than St. Patrick. St. Patrick’s symbol is the three-leaf clover which he used (as the story goes) to teach the holy trinity while spreading Christianity to the Emerald Isle.

2: Leprechauns also have nothing to do with St. Patrick, nor do rainbows or pots of gold.

3: The symbol of Ireland is actually the Celtic Harp, not clover of any kind.

4: The Great Famine (Potato Famine) was misguided imperialism at best and genocide at worst, and although it was precipitated by the blight of potatoes from America that spread across Europe, it was the response of Great Britain (or lack thereof) that created the level of famine that prevailed in Ireland from 1945-1949.

Now that we’ve gotten those little facts cleared up, we can take a brief look at how a monoculture-based agricultural system was relied upon to feed the rural peasant and working classes of Ireland and with its failure led to years of widespread famine, disease, and emigration. Originally introduced as a garden crop of the gentry, potatoes became a supplemental starch in the Irish diet by the late 17th century, and by the early 18th century they became the base food for the feeding of the poor, especially during winter.

As the economy continued to grow from the mid-18th to the early-19th centuries, and more and more diverse foodstuffs were being exported to England, the potato became more and more of a crop of dependency for the peasant farmers across Ireland. As the best land was being used by landowners for grazing of cattle to satisfy the growing popularity of beef in England, peasant farmers were pushed to more marginalized land, where potatoes still would grow well. When tillage was introduced it made the cultivation of potatoes easier and so peasant farmers became more reliant on the production of potatoes on their own small plots of land to feed their families as it was the only abundant crop they could grow to meet any sort of caloric needs of their families. The dependence on potatoes was further compounded by the fact that, for the most part, the majority of potato cultivation was with one main variety, the Irish Lumper. So when the blight passed through Ireland, believed to have been brought over on ships from America, and spread throughout Europe within a year, it was the monoculture that, in part, led to the complete devastation of the food system on which 40-60% of the population was reliant on for food.

Although the blight itself was not the true catastrophe, but rather the response of Great Britain to the food shortage and their continued export of all foodstuffs from Ireland, of which there was ample food to feed the entire population, which turned the blight into a full-blown famine, we should take away from the entire situation that monocultures are never a good idea. We have a significant problem with monoculture farming in many parts of the world, especially areas that are poorer, and in looking to the future, we need to be reminded of the past because, although the imperialistic nature of Great Britain is no longer a threat to the global food system, there are multinational companies that could be, especially when they are promoting monoculture systems in poorer parts of the world for their own financial gain.