This week I’m going to keep my food-centric entry brief. I could list all of the fun things I’ve been cooking (lots of soups and soba noodles with various braising greens and bok choi) or what I’m going to be making for New Year’s Day, but I’m going to focus instead on a newly inspired direction Rey and my food choices have taken. While I was visiting Rey’s family in central Texas over Thanksgiving I got to break down my own deer. It was a thrilling experience that I will never forget, and it turns out that it was one that has only deepened my appreciation for (and focus on) where my meat comes from. Since moving down to Champaign from Chicago we always tried to purchase locally raised and slaughtered meats whenever we could afford to. It meant a lot to us. We got to know the farmers who were raising the animals. Plus, the meat just tasted a million times better than the stuff you get at a general grocery store. It also meant that we naturally ate less meat, simply because we paid a little bit more for it, and in turn, we savored what we did buy even more. 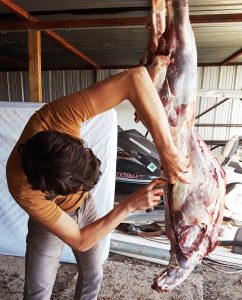 The deer crash-course (it wasn’t hit by a car so no food-pun there, sorry) occurred after Rey and I were talking with Rey’s brother about taking some venison back with us like we had the year before. George, a friend of Rey’s brother, said he had a bunch in his freezer that we were welcome to, and to just let him know what we wanted. Instead of leaving it at that, Rey decided to “jokingly” tell George that we wanted it fresh and that I wanted to be the one to skin and break it down. This was not entirely false, I had always wanted to learn. But, it was not true in the sense that it had not been our intention on this trip, nor had I ever brought it up to Rey.

The joke was not taken as a joke. George called Rey’s brother at 5:00 a.m. to let him know that he had hit a doe and to come and gut it before taking it back so we could break it down. 3 hours later the deer was strung up and I was learning how to skin and break down a deer.

I was incredibly excited. I watched every motion Rey’s brother showed me and listened to every word. I was so grateful for the wisdom he was imparting on me. I wanted to learn more. I broke it down into the large components, mainly just the legs and backstrap. The deer in Texas aren’t as big as the deer in Illinois or Pennsylvania that I grew up around, so there wasn’t as much to pull off of it.

We brought the legs back up from Texas in a huge cooler filled with ice. I devoured YouTube videos showing how to properly break down the various parts of a deer and get great pieces of venison out of it while also learning about all of the uses for the smaller random parts. I ordered Killing It: An Education by Camas Davis and began reading about her journey to become a butcher in Gascony after losing her job in journalism (it’s an amazing book and I highly recommend it). I started looking at game cookbooks that included diagrams how to properly break down the various animals. I had found my new side-passion.

I encourage everyone to learn some aspect about how to properly break down your own food, even if you just learn with a chicken. You don’t have to be the one to hunt or kill it. But I encourage you to learn. Maybe you’ll find the same zeal for it that I did. It is incredibly rewarding.

Knowing how to break down an animal properly instills an even deeper respect for the animal within myself. I want to use absolutely every part of it for some purpose, even if it’s only for stock. I want to decrease food waste and reduce my reliance on large-scale corporate “protein plants”, not just due to the severe animal welfare issues, but due to the extreme environmental issues as well. I don’t want to be complacent in the production or raising of my food. I’m looking forward to learning more and continuing my journey of personal “better butchery.”

Have a pleasant holiday season and a happy New Year, everyone! Now go enjoy some venison, duck, rabbit, or goat for the holidays!