After having been gone for four years, one of the first things I did upon returning to Santa Barbara, California, my home town, was to bite into a Fuyu persimmon that was grown in my mother’s garden. 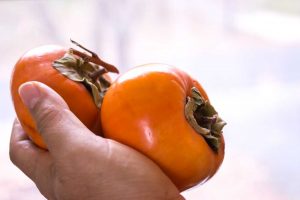 It’s not new to talk about the connection between food and memory, but on this particular trip, every day was an intense experience of reconnecting with lifelong friends–and each time, that connection happened over a meal.

With some friends the meeting was at a particular restaurant, one that had been part of a past routine, over a specific menu item–cajun pizza, for example, is what I had every Wednesday morning with my friend Karin. With Jessica, it was eggs rose at D’Angelo’s. After being back for just a day, it became clear that every meeting with an old friend had a specific food attached to it–and because I was there for such a short time, and because I had been gone for so long, it was important to catch up quickly, so the familiarity of food and place served to make that happen. There was no need to waste time talking about where to go or looking at a menu, the food set the scene for the conversation to pick up right where it had left off.

It wasn’t just restaurants though. It was a potluck at a friend’s house, or someone making my favorite dish–the familiarity of the food helped to make the time seem longer. On Tuesday night it was crunching on a carrot  from the farmers’ market while sipping a beer at a pub on State Street. It was that farmer’s market that inspired me to start the market in Champaign on Tuesday night. I wanted to recreate that feeling.

And then there were the new places–the ones that didn’t exist when I left. Eating at those restaurants provided the feeling of being a tourist in a place that I had never been before. But now I know that when I return the next time, they will become part of the memory of the people I was with the last time.