I’m sure you know how it is. Everything’s ready to go. Supplies have been acquired; plans are in place. Said plans are verging on being put into action when some external factor – over which there is no control – comes rudely into play. Perhaps that external factor is weather (it often is around here). Maybe a cold is caught; perhaps someone had extra tickets to the basketball game. Whatever – the plans are derailed. Good intentions continue, but ultimately do not prevail. Enthusiasm wanes, the window narrows, and then it closes. The plans are never executed; there are promises to get to them next year…. which can suddenly become 3 years. Or… 5 years.

I could be discussing the bumps encountered at the start of just about any project, but in this case I’m talking about starting seeds – growing seedlings for my garden (and often other people’s gardens) inside while there’s still snow on the ground outside. I’ve done it before – several times, using several methods – but it’s been five long years since my last endeavor.

Reader, instead of guiltily walking past my seed starting equipment every time I’m in the basement, I’m dusting it off and am giving it a go this year. I’m calling it my “quiet return to form”. 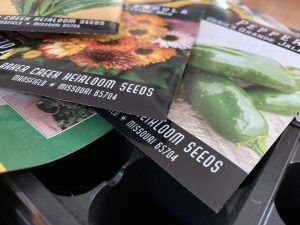 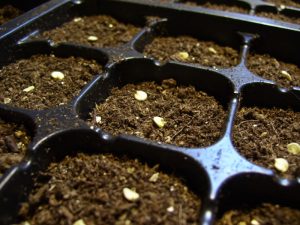 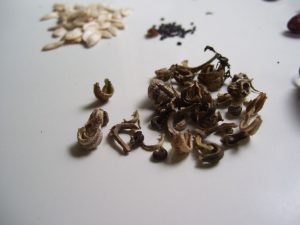 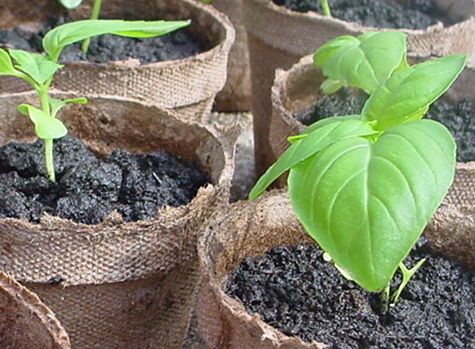 Much has changed in my household since I last turned on the grow lights in 2015. Our kids grew up, moved away, and created their own households. My constant gardening companions, our family cats, crossed the Rainbow Bridge in 2017, 2019, and 2020. As the number of beings in our house decreased, I found myself far less interested in growing tomatoes, peppers, and chard, and more interested in thrusting a colorful and somewhat ridiculous riot of flowers and herbs onto passerby via my front yard. But I’ll confess that in those five years, despite those good intentions, I got a little rusty by not gardening as vigorously as before, and satisfied myself by doing my version of the bare minimum.

Was it actually satisfying? No.

The step of coaxing baby plants to grow in a dusty basement using fluorescent lights, soil mix, seeds, and water can seem a bit extreme, especially when one can buy lovely flower, herb, and vegetable starts from a variety of growers at spring plant sales or local farmers markets –  I absolutely encourage that and won’t ever stop doing that myself. It’s a rare person who can grow everything themselves, and local farmers have my undying gratitude and appreciation for the work they do. But there’s something comforting about the glow given off by basement seed setups in my neighborhood in late winter, something sweet and familiar and participatory and forward-looking that somehow eases the pain, just a little, of yet another two inches of sleet in the forecast.

People starting seeds in their basements are making plans. Those plans involve food and flowers cultivated by their own hands – an exercise in tactility and grounding in a world that feels, to me, less grounded than ever. This spring, even as I’m still getting used to all the change inside my house, I want to join those people – I want to make plans, and then quietly return to something familiar outside the house – something that can’t be rushed, something with lower stakes if it fails… and beautiful, delicious reward when it succeeds.

Check out more from Lisa Bralts at Backyard Industry.