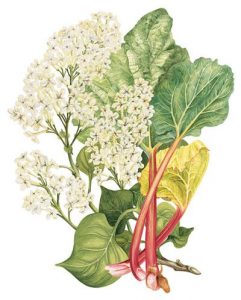 The other day I saw the first local rhubarb of the season for sale at Common Ground Food Co-op in Urbana from Saturn Farm. The bright green stalks with just the hint of red at one end absolutely screamed: “BAKE A PIE WITH ME!” I, unfortunately, could not oblige the rhubarb’s demand at the time, but soon rhubarb…so soon. Rhubard truly is the harbinger of pie season, unfortunately for us all, local field-grown rhubarb only starts to become available a month and a half after Pi Day. In central Illinois, it is the first specialty crop that becomes available in the spring that is primarily used as a filling in sweet pies. Granted, there are a lot of other ways to use rhubarb other than pies, and in other pairings that aren’t sweet, many of which we will discuss below. But, for most people, rhubarb is all about pies, crumbles, jams, and jellies; not about the deliciously crisp and tart flavors of raw rhubarb out of the field.Personally, I love the tartness of rhubarb and don’t feel that it always needs to be covered, smothered, and reduced with cup after cup of sugar. Full disclosure though, I also enjoy eating slices of lemon with salt on them, so, maybe I’m not the best person to listen to when it comes to determining the sourness of something. That point aside, rhubarb really does have a great deal of versatility that is rarely explored in the American kitchen, but that doesn’t mean that you can’t, or shouldn’t, experiment with rhubarb while it’s in season. So let’s consider all of the possibilities so that everyone can enjoy this wonderful specialty crop while we can get it locally.

Although rhubarb is not a fruit, it is a vegetable, it is commonly prepared as if it were a fruit. Only the leaf stalks are edible as the leaves of rhubarb are poisonous due to high levels of oxalic acid, which is a nephrotoxic and corrosive acid present in many plants (but not at dangerous levels).The stalk is called a petiole (there is your vocab word for the day) which connects the rhizome or rootstalk within the soil to the leaves above ground. Rhubarb is grown widely, especially in heated greenhouses, so that it is available throughout the year. “Hothouse rhubarb” is usually brighter red, tender, and sweeter-tasting than outdoor rhubarb. Outdoor, or in-field, rhubarb can be harvested as early as the mid- to late spring and can be harvested throughout the summer.

Rhubarb stalks are a good source of vitamin A, vitamin K, vitamin C, potassium, calcium, fiber, and manganese. Due to the high levels of vitamin K found in rhubarb, people on certain blood thinners may want to check with their doctor before consuming large amounts of rhubarb. 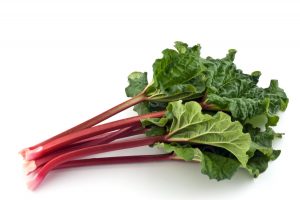 Stalks of freshly harvested rhubarb are firm and have a glossy sheen to them. When looking for rhubarb at the store or at a farmers market look for those characteristics. Rhubarb can also become woody and stringy if it isn’t harvested soon enough, so try to avoid stalks that are wider than 1-inch. Also, rhubarb should not be consumed if it was harvested after a severe frost as the oxalic acid levels in the stem can increase to dangerous levels. With that in mind, never purchase rhubarb that has soft, limp stalks or shows any signs of black, shriveled leaves. Typically the leaves of rhubarb have been removed before being sold so people don’t accidentally eat them, but if there is any evidence of blackened leaves near the top of the stalk it is always better to be safe and avoid those stalks. Another thing to keep in mind when shopping for rhubarb is that tartness tends to increase with the age of the stalk, so thicker stalks tend to have more of a bite than thinner, younger stalks.

Store rhubarb in your refrigerator wrapped in a damp towel or in a plastic bag (or both) for up to 1-3 weeks. Stems will soften and shrivel as they dehydrate, similar to celery, so change the paper towels or re-dampen as needed if they dry out. For long-term storage, rhubarb can be frozen. Rhubarb can be frozen either raw or cooked, but frozen rhubarb will be soft when thawed so it is typically cooked first. It should be washed, chopped, placed in boiling water for about a minute, and then immediately placed in cold/ice water to halt the cooking. Once it is cooled, the rhubarb can be placed in airtight containers or freezer bags and frozen. Rhubarb can also be easily cooked down and turned into a jam for long-term storage. One of my personal favorite recipes for jam is bourbon peach rhubarb, and while the recipe linked to below is not my mother-in-law’s recipe (she would probably kill me), I’m sure it is halfway decent. See some of the links below for general canning instructions for rhubarb, as well as some interesting ideas for new ways to approach this interesting vegetable. 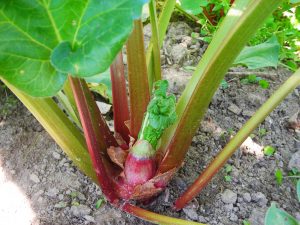 Typically the rhubarb that you buy at the grocery store or farmers market will have the leaves removed already. But, if the leaves have not been removed, promptly cut the leaves off once you are home. Also, cut off any woody parts from the base of the stem. Typically, the woody section on a stalk of rhubarb will be paler in color, if not white, and can easily be removed with a knife. A general rule of thumb with rhubarb is to remove the bottom inch of each stalk, and then more if a stalk still has a white section present. If the rhubarb is older and the stalks are wider than 1-inch they may need to be peeled to remove the tough outer layers. Simply use a vegetable peeler and remove the stringy outside layer or two and then use the rhubarb as intended.

While rhubarb is typically cooked, young tender stems may be eaten raw. The tartness balances nicely with sweet dishes so feel free to slice or dice raw rhubarb and add it to spring ice cream sundaes, hot or cold cereal, or use as a garnish on any dessert that is missing a certain brightness. On the more savory side of things prepare raw rhubarb in the same manner but try adding it to salads, all kinds of salads. It can also be used as a garnish for savory soups like cucumber soup.

Soup – While rhubarb is delicious as a garnish on a soup (typically a cold soup), it can also be used in soups. When a recipe calls for rhubarb in a soup, or if you just want to get creative with your summer soups, add small rhubarb slices toward the end of cooking time to retain texture while adding wonderful flavor.

Roasting – Rhubarb can be roasted as a side dish much in the same way my grandmother roasted carrots when I was growing up. Wash and slice or chop rhubarb to the desired size (I prefer ½-inch slices), sweeten with a little brown sugar or honey, toss in a baking dish and bake in the oven at 375°F for 30 minutes. Add some fresh rosemary for a savory twist.

Sauce – Making a sauce with rhubarb is one of the most common uses of the vegetable. It can be left as a sauce or reduced further and canned as a jam or chutney (depending on what you put in it. For a basic sauce, chop stems into 1-inch chunks and cook in a small amount of water with the sweetener of your choice (to taste) until the stalks begin to break down. When the fibrous stalks become stringy and mushy, it is done. You can use the sauce to pour over cake or ice cream, or you can freeze or can it for later use.

Filling – Rhubarb does not need to be pre-cooked to be used as a delicious filling. You can use it alone or combine it with other fruits and bake in pies, crisps, and/or tarts. It goes particularly well with peaches, lemon, apples, pears, and berries.

Beverages – Sliced raw rhubarb can be added to water to flavor the water. It can also be blended for a fresh take on a margarita or modified bloody mary. It can also be used to make fruit wine or a vodka liqueur.