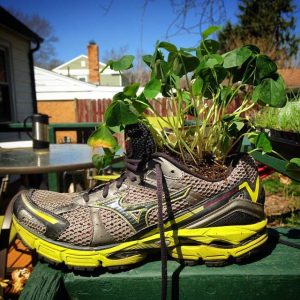 If you haven’t already, go see the documentary The Greenhorns. There are a lot of films about food and farming out there, but this is one of my favorites. The stories from beginning farmers, in all their struggles and triumphs, are great. However, I was sold when one farmer discussed the number of endurance athletes that get into farming. The video cuts to a farmhand out on the trail: tall, thin, and agile. The farmer’s voiceover says, with a hint of chagrin, “It’s just a lot of work.” And yet here is a farmer getting in a few miles. The film asks a question that we often ask in our Farm Dreams workshops: what does it take to be a good farmer? One answer is simply endurance, on an order that some people can’t understand.

This spoke to me, because I love farming, and I love running. There aren’t many other activities I feel so naturally inclined to. However, my knees seem to be giving up on me. I ran a marathon several years back, my first and perhaps my last. It was incredibly fun, but the aftermath finally made it clear: only so many parts of my body are cut out for it. My knees began to ache, and have ached pretty much ever since. Physical therapy, rest, ice, and dietary changes have not been my pound of cure.

Thus, my hopes of becoming an ultra-marathoner, mountain-runner, triathloner, always a dream deferred, might at last be at an end. And that’s ok. That’s a lifestyle of serious and narrow dedication, and I’ve never quite had that. I simply enjoy running. My competitive edge is gone, to be replaced by the realization that running offers better time for observation than walking, biking, or any other locomotion. When I arrive in a new place, I try to make time to run around it a bit. I find that all my senses are available, but I can move just a bit faster while still fully employing them. I can stop on a dime to take in a particular sensation, wear a small pack to pick up things or to bring a camera, and make mental notes that will be more quickly acted upon than when walking.

This does not solve my knee problem of course, but if I save the running for when it’s time to observe a new area, or a change in the environment, the pain remains at a low ebb. It’s worth it. I learned and retained so much information about the developments of this spring in my neighborhood just by running a few weeks in a row. The observations would have otherwise passed me by.

So where does this all lead? As I have said before, I will someday have a farm. That’s a “when”, not an “if”. Therefore, this leads to the weekly runs that will take me around the perimeter of my future fields and pastures, criss-crossing the acres and, perhaps, through a shallow stream or a rocky path beneath the hardwoods. From this I will gain the attention to detail, the broad observations, and the consciousness it takes to be an ecological farmer.

Observing and assessing new information while doing other immediate tasks has, in the end, never been wholly successful for me, so running will be another tool at my disposal. My knees will ache, as surely as a hail storm will break branches and bones, but all will be accepted. Like my stewardship and my production, my running will be a deliberate act, a pace set to the beat of the land and the turning of seasons beyond seasons.