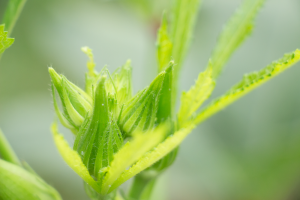 The tomato and cucumber vines have started to wither, the eggplants seem to be frozen in time (they have stopped growing altogether) and the fall crop of greens that came up so beautifully, now looks like freshly mowed grass (thanks, bunny), but the pace suddenly seems manageable. All of the plans that I’d had in March, the ones that disappeared in in a blur of jungle-like vines and mosquitoes (the White Street swamp) drifted back into focus, and seemed possible on a sunny Saturday morning in September. 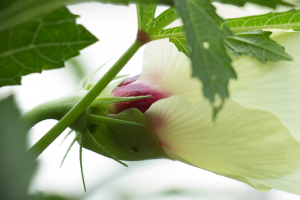 Back in February when I was ordering seeds for this year’s garden, I chose varieties partially because they looked like something I wanted to paint. And I thought that because my garden was so big this year, that I would spend my evenings trying out new recipes, and then flit off to my studio to paint the very heirloominous models that I had made new, spectacular dishes with, and the whole thing would be so romantic, and I would be so productive. And of course none of that happened. I spent evenings fighting with my tomatoes that had fallen down, again. And again. And digging out the tomatoes that were not rotting on the vines (but more than occasionally ending up with handfulls of drippy, stinky, slimy tomato goo). I’d haul my trays of harvested vegetables into the house and look at the clock…and into the freezer they’d go. Not so gourmet. And if they did somehow make it up the stairs to the studio, they’d sit on that desk and rot. 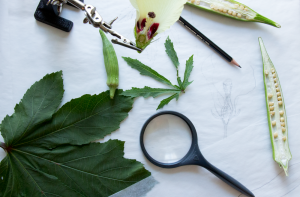 So when I was presented with that glorious feeling of almost-fall-in-the-garden-resignation on Saturday morning, I ignored the massive bent over heap of tomato plants, the shabby cucumber tendrils that had buried the heavily laden pepper plants, the piles of tomatillos and ground cherries that I knew full well were under the heavy mats of soggy plant material, and I headed straight for the three proper plants that stood upright, green, healthy, with gorgeous flowers, and unblemished tender fruits. Okra.

In order to learn as much as I could in a day, I used the tools I am most comfortable with: a camera, a knife, a magnifying glass, and pencil and paper. The result of being an art-turned-biology major landed me in a scientific illustration class in college (the second of two classes that I credit with heavily impacting where I am today), is that I am better at both of those things now. I started with my camera, as that is the least destructive way to look at things–and it is a great way to notice what is happening, the architecture of the plant, and who else is hanging out there, and why. The visitors to the flower got me to thinking about how okra is pollinated. It turns out, as farmers already know, that okra flowers are perfect, meaning they have both male and female parts, and in the case of okra, they are capable of self pollination.

And then I lopped off a leaf, a flower, and some fruits, and took them to my studio. Time for the dissection. On my wishlist is a dissecting microscope, but in my reality is a magnifying glass. I hopped back and forth between my painting table where I took apart and sketched the desiccating plant parts,  and my computer where I looked up answers to the questions that kept surfacing. 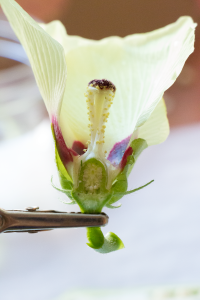 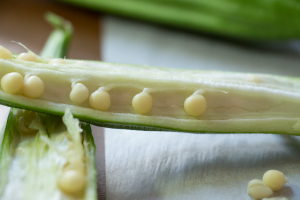 I sliced open a flower–good thing I got it in the morning, because they close in the afternoon–and a few of the seed pods, and had a look inside. As I mentioned earlier, I consider myself a botanist-artist hybrid, so as I pulled the plant apart, I also sketched. And by mid-afternoon I had five paintings started, that I worked on through the evening. Kind of like ordering seeds in February, what I think I can accomplish, and what ends up as a finished painting are two different things. We’ll see. 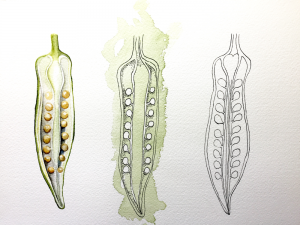 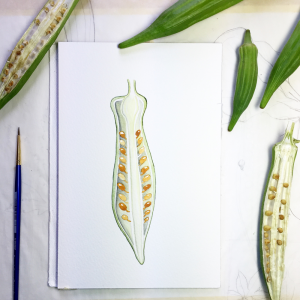 By morning the never-ending weekend feeling was giving way to the anxiety of the onset of the Sunday blues. So the paintings were left to sit, and the intact okra was hustled to the kitchen. I didn’t have a lot, but I’d had a request for some to be pickled, and I wanted some as curry, lime, cilantro stir fry kind of thing I had tried a couple of weeks ago. I managed to photograph the latter recipe, and will share it here.

–all fried up in a cast iron pan

*Add cayenne or other pepper if you like it spicy! 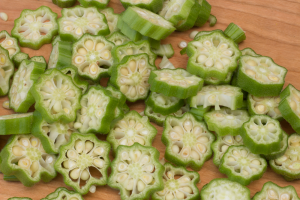 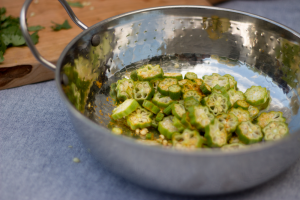 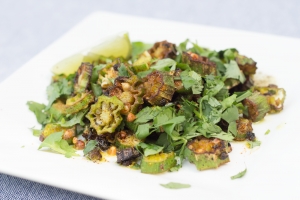