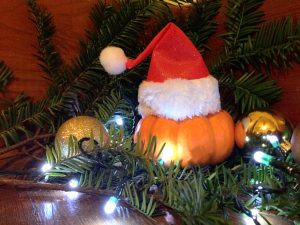 Winter has officially begun. The solstice was yesterday, a day that started just before daybreak with a 20 mile run at Clinton Lake, followed by a fire and white chili with many other runners, followed by a few (sunny!) hours of frisbee, followed by quite possibly the largest bonfire I’ve ever seen, and even more chili, this time red. I would say winter is off to a great start. But more importantly, the days are getting longer. It’s really more like the beginning of spring, if you want to be super optimistic about it. More daylight! From now until June! 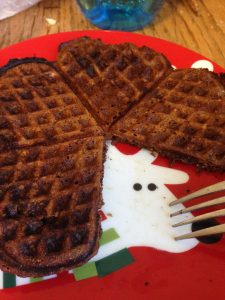 The reindeer peeking out from behind my gingerbread waffle agrees. The prospect of snow, ice and subzero temperatures that January is sure to bring is not so much a deterrent as a way to make the world clean and bright and awash with hope for the real spring. The land needs that snow. The snow needs to be thick and heavy so it can melt and make the ground damp and fertile in the spring. The farmers need those frigid, clear nights, the kind where you can see all the stars – but your eyes might freeze while looking – to kill off any remaining invasive bugs. But the best part about those cold days is knowing that it’s going to be light out when you leave work at 5, the sky still blue and streaked with pinks and oranges, and the ground crunchy and bright white under your boots. 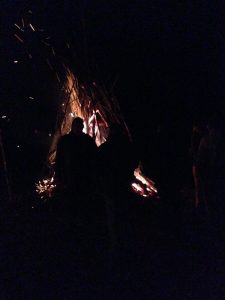 And, if by late December, you’ve forgotten what it means to be hot, just go to a solstice party and stand a little too close to a bonfire bigger than you. So celebrate the holidays and the return of the sun, and think of it as the prelude to spring, rather than the beginning of winter.