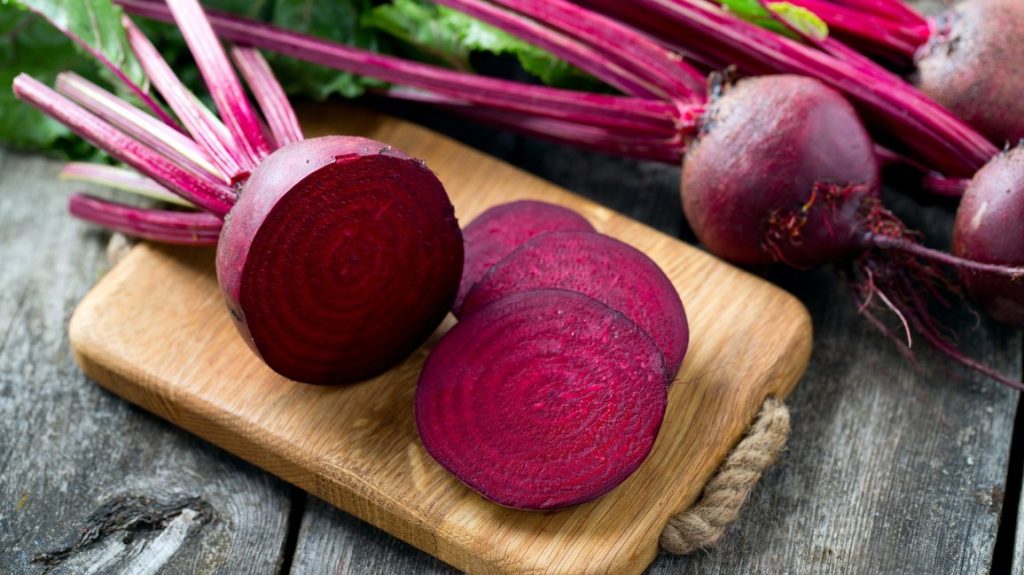 I am a big fan of beets. I absolutely love a good, hearty Borscht in the winter and in the spring and early summer I make a raw beet slaw with daikon and cabbage that is to die for. Mmmm beets. Now, to be fair, I was not always this in love with beets. In fact, my earliest memories of beets involved them roasted with honey or something and they were just way too sweet for my taste. Go figure, a kid who didn’t like sweet vegetables. But I didn’t. I was also not a fan of maple brown sugar roasted carrots. Again, too sweet.

Now that I’m older and no longer subjugated to overly sweet vegetables. Vegetables I might add that are incredibly sweet, to begin with. I am able to play around with more interesting preparations and pairings. I can get all savory and @&$%. BLAM. So I have. Rey has shown me an amazing world of Eastern European cuisine that has oftentimes involved beets and other root vegetables, much to my delight. I have also started exploring more Irish cuisine which also uses beets in deliciously simple ways. I’ve learned that beets are incredibly versatile, and while you can always take them to the sweet side of the kitchen if you want, sometimes the dark and savory side is much more interesting.

Whatever your beet pleasure may be, I encourage you to play around with some new cuisines and flavors when preparing beets and just see what you like. Try sweet, try savory, even try raw and pickled. Try it all! Especially if you can get fresh local beets with the greens attached because then you can experience twice the exploration.

The term ‘beet’ is a shortened version of the actual name of the root vegetable, ‘beetroot.’ It is also referred to as garden beet, blood turnip, and red beet, though not all varieties of beetroot are red. Beetroot actually comes in a variety of colors including maroon/red, white, yellow/golden, and multi-colored. Originally domesticated in the ancient Middle East for its greens, it is believed that by the time of the Romans it was cultivated for the roots as well. In the Middle Ages, it was used for its medicinal properties and was commonly used to help alleviate digestive issues and ailments involving the blood.

Beets are particularly rich in folate, especially when consumed raw. Beets are also high in manganese and fiber, both soluble and insoluble. Insoluble fiber helps to keep your intestinal tract running smoothly and soluble fiber helps to keep your blood sugar and blood cholesterol levels on track. Beetroot also contains a decent amount of vitamin C, potassium, and magnesium. Beet greens are also incredibly nutritious and provide an excellent source of vitamins A, C, and K among other vitamins and minerals. The greens are commonly eaten raw, juiced, or sautéed.

Beets larger than 3 inches in diameter are often fibrous and woody, so a good way to choose beets is to look for ones no larger than your fist. Also, when buying beets, avoid beets that are soft or appear shriveled as this can be a sign of them being improperly stored or simply starting to go bad. Beets will oftentimes have splits from irregular growth, but the beetroot is perfectly fine and the split can just be trimmed with a paring knife if you feel so inclined. If buying beets with the greens still attached, make sure to look for greens that aren’t too wilted or have started to turn brown. However, if you aren’t going to use the greens this is sort of a moot point.

Beet greens are packed with nutritional value but must be prepared separately. Upon storage, the greens will quickly draw the moisture from the root greatly reducing flavor and the beets will become shriveled so remove the greens and leave a one-inch stem on the taproot to retain moisture and nutrients. After separating, beets store well for about a week in perforated plastic bags in the refrigerator. Use beets while they are still firm and fresh. Beet greens are best used fresh, as their integrity will diminish rapidly. Store greens wrapped in a damp cloth or in a plastic bag in a drawer of the refrigerator. Beet can also be frozen or pickled for long-term storage.

Wash beets carefully without breaking the skin. Breaks and tears allow color and nutritional value to escape. Raw beets need only to be scrubbed and their skin can be left on before being grated, sliced, or cubed. If you are cooking beets you can either peel the beets beforehand or after, depending on the manner in which you’re cooking them. After cooking, the skin can typically be rubbed away once the beets have cooled.

Beets are known for their powerful red pigment which stains dish towels, wooden cutting boards, and sinks so be careful what surfaces come in contact with the beets. If your hands get stained while preparing the beets, salt easily removes the stains from the skin if you use it as a scrub.

Raw: grate or shave raw beets and add them to salads and slaws. You can cube raw beetroot and add it directly to soups or stews, just be aware that the beets will bleed and color the soup, especially in the case of red beets Yellow and white beets will bleed but it won’t be as noticeable.

Boiling: leave about an inch of stem on the beetroot and place in a large pot of water with salt and vinegar. Bring the water to a boil and then reduce to a simmer. Cook the beets until they are fork-tender, about 30-40 minutes (longer if the beets are really big). Once cooked you can let them cool before peeling, but be aware that they can overcook while you wait. If you’re worried about overcooking them while they cool, dump them in an ice bath or dump out the boiling water and run cold water over them to stop the cooking and then peel them. This is also how you blanch beets.

Steaming: place the whole beets in a pot with a steamer rack over about an inch of water. Bring the water to a boil and leave the beets covered for about 30 minutes with the heat on high. If the beets are large and need more time, you may have to add more water to the pot. Once the beets are fork-tender, remove them, let them cool, and then peel them. Beets can be peeled before steaming if desired.

Whole Roasted: remove the stems of the beets but leave the beetroot intact. Preheat the over to 400°F. Place the beet(s) on a piece of aluminum foil large enough to make a sealed pouch. You can individually wrap the beets or put several beets in a pouch, just make sure not to overcrowd the beets and put beets of about the same size in pouches together. Drizzle the beets with enough olive oil to coat them and sprinkle with salt and pepper. Wrap the beets in the foil and seal it tightly, but leave a little air inside the pouch with the beets (i.e. don’t wrap them super tight). Roast the beets until fork-tender, about 40-60 minutes (longer if really large), and check their doneness every 20 minutes. Once done, remove the beets from the oven, let them cool, and peel them.

Roasted: remove the very top and bottom of the beets, peel, and cut into wedges or cubes. Preheat the over to 400°F while you toss the beets with olive oil, salt, and pepper. Place the beets on a foil-lined sheet tray (preferably with a lip) and roast until the beets are fork-tender, about 20-30 minutes depending on the size of the pieces.

Greens: enjoy young beet greens tossed raw into a mixed green salad. More mature beet greens tend to be a little tougher and are best steamed, sautéed, or used in any dish that calls for mild, tender greens such as spinach or chard.