Anyone who is a fan of Haruki Murakami will know that quote. While the book itself is an underwhelming mix of memoir and travelogue, the idea behind the title is not. I do run, a lot, and so I often wonder what I would write if I was assigned to write a book with that title, and what the reader would get out of it about who I am. It’s all about how to tell the story and make sure your audience gets at least something out of it.

Probably you’d get a lot, since I run long distance. You would learn ALL about the different parts of me that hurt and what helps and doesn’t (right now, I tape my right foot to prevent arch pain, but nothing else consistently hurts!). About how no matter how bad of a day I am having, if I can force myself into my running shoes and out the door, I’ll have forgotten (most) of the problems by the time I get home. How, when it’s hot and my hair is soaked with sweat, the part that falls next to my ear makes a whistling sound as I move. The differences between running on trails and in town. How in the summer I love to run in the evening and feel the heat still radiating out of the brick walls. How in the winter the snow squeaks and cracks and the world is silent when it’s daybreak in the single digits. About how my running shoes wear out. And eating. I love to run, but I also really like to eat. So I cook, and I usually enjoy it. Telling the story of me through the context of running and eating gives the average reader a pretty good sense of Magdalena. 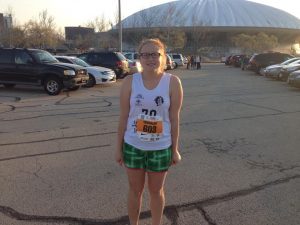 Magdalena at Assembly Hall before the 2014 Christie Clinic Illinois Marathon.

On the 6.4 mile run I went on this morning, I saw, while moving at the not brisk, but not glacial, pace of 10 minutes/mile, a brown eyed cowbird, a cardinal, numerous house sparrows, a crow, a wren of some sort, a starling and a redwing blackbird. Keeping in mind that this is just what I saw while zooming down the sidewalks of Urbana, you can get an idea of how many other birds there must have been that I just didn’t notice.

And as I’ve been doing the social media for The Land Connection, I have to think about how to tell the story of us through sharing things about our programs – so people know about the things we have coming up, and sharing things that would be relevant to you, the reader (or facebook/twitter follower), AND keep it interesting so you don’t just zoom past it in your newsfeed like the birds I am sure I missed. Sometimes, I know things will be popular, and sometimes we’re taken by surprise at the volume of responses.

So too do farmers, using social media to tell the stories of their farms, which in turn, sells vegetables. So here’s where I was going with this: farmers need to think about “What I talk about when I talk about Farming” and then leverage the tools they have – both traditional and social media, word of mouth, presence on menus – to tell their story in an exciting, compelling way. And we’ve got resources to help with that (social media starter kit, anyone? July just came out), but you have to know what you talk about when you talk about farming.