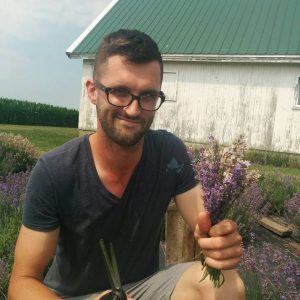 Preferred Name: Taidghin (it rhymes with ‘pagan’,sort of, and it is not the same as Tegan)

Hair: Not Gray (yet)

Degrees: 2 (the same as the number of times I’ve used said degrees)

Love Song: I Love You Honeybear by Father John Misty

Poem: On the Vanity of Earthly Greatness by Arthur Guiterman

About Me: I grew up in downtown Philadelphia. I always had an affinity for wandering around the city and meandering through it’s parks and down it’s narrow, tree-lined streets. I was always exploring. When I was 10 my parents bought a small horse farm about an hour outside the city, and every weekend we would leave the city behind and resume our double life. The farm was our escape from the city. My brother and I learned to ride horses from my Dad. I spent hours upon hours beside my mother, weeding, planting, and pruning her gardens well into dusk. I loved it.

The herd of Alpaca my father bought when I was 16 however, was an interesting addition to the farm to say the least. The screeching, kicking, and spitting antics of these fluffy, alien-like creatures were oddly endearing. In a very short period of time my father and I learned about herd management, breeding, shearing, yarn production, and local fine fiber economies. After high school I traveled to St. Louis for college and earned my BSBA in Marketing & International Business and BA in Art History & Visual Communications from Washington University in St. Louis. After graduating I stayed in St. Louis for 3 years while working as the Assistant Curator of Visual Resources for the Department of Art History & Archaeology at the University. After 7 years in St. Louis though I needed a change of scenery and so I moved to Chicago where I worked at the School of the Art Institute of Chicago in the Office of Exhibition Practices and as a Freelance Graphic Designer.

After meeting my husband, Rey, we started getting involved in the local food movement in Chicago. We both love to cook and love to support local producers so it was a natural fit. When we decided to leave Chicago we chose to stay within the local food region we had come to love and moved down to Champaign where we had some local connections and made a fresh start.

After moving down here Rey & I discovered Prairie Fruits Farm & Creamery and began volunteering with the baby goats in the mornings and gardening in the summer. I started a stage in the cheeserie (later to become one of their weekend cheesemakers), we started helping out around the farm and learning about small-scale food production and local food economies. Wes and Leslie served as mentors for us and in 2017 they gave us an incubator farming plot to garden right next to the Delight Flower Farm. Having never farmed on that scale before we learned a lot very quickly and planned, planted, and grew quite a bountiful organic garden that we sold the fruits of to PFF, Pizza-M, the Red Herring, and other local chefs.

That summer I also worked at Blue Moon Farm with Shae and Lorien and directly used the knowledge I gained there to better farm and care for our own plot. I learned so much working in the fields and greenhouses there that it was a little overwhelming, but also one of the best summers I’ve ever had. I gained a lot of Farmer’s Market experience from both Blue Moon and Prairie Fruits Farm working as vendor for both farms on occasion, experience that I then brought to running our own booth for our bakery.

In 2017 Rey and I founded Lucky Pierre Bakers. Our experiences since moving from Chicago helped shape the direction we wanted to take our business. With a focus on local and sustainable ingredients we began building products and a baking and business philosophy that’s main purpose is to support, expand, and promote local food economies.

Soon after moving down here I became aware of The Land Connection through Prairie Fruits Farm and met Mallory while she was running the Farm Beginnings Workshops at the farm. I was impressed and extremely interested in the work they did as an organization. As the bakery started to get off the ground we looked into the Champaign Farmers’ Market as a possible starting point and began selling dog treats there last summer. There I met Sarah and Cassie and was inspired by the work The Land Connection was doing to combat the food desert that is downtown Champaign while providing another selling avenue for small and mid size farms.

Before Thanksgiving I came across the job posting for the Marketing & Outreach Coordinator position at The Land Connection. I was researching a similar position for a new position proposal, but I knew that I was a perfect fit for the Land Connection, I went for it, and here I am. I am so excited to be working with The Land Connection and I can’t wait to see what lies ahead!