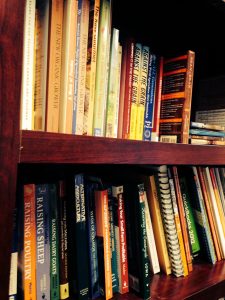 Last year, I wrote a list of all the things a farmer must be. Zoologist, gourmand, mechanic, accountant, salesperson, naturalist, executive, and lumberjack were just a few items on the list, but I keep coming across more. This past winter, a speaker at a conference added “psychologist”, for when a farmer must balance the strain that their family and crew are going through, decipher what their customers want, and struggle to keep themselves sane and healthy when failures abound. Not every farmer must be all of these things, but all farmers are called upon to wear many hats and, really, to be extraordinary individuals.

To Thomas Jefferson, the farmer was not merely necessary. The discipline of the work made the farmer the ideal citizen. Abraham Lincoln called the United States Department of Agriculture “the people’s department”. Before World War II, farmers had their own political parties that exerted real influence. They were feared and revered in equal measure.

The rise of industrial agriculture, however, has diminished this role, convincing the growing population of non-farmers that the creation of their food is a checklist, a matter of addition and simple tasks to get from seed to harvest. The idea of a farmer has been reduced to, at best, that of a simpleton. At worst, they have become invisible entirely. Far from being a political force, the farmer seems lost amongst the corn.

But the only thing that might make the average farmer dumb is the willingness to stick with an ill-respected career. We should be thankful that they do, because the wider crisis is what this could mean for the future of farming in America. This misdirected attitude is easily absorbed by the next generation. When farming is viewed as a task for the unambitious only, where gifts of intelligence go to die, flight from rural areas is encouraged. Good food becomes as hard to find as does respect for those who grow it, and who enjoys being looked down upon?

The truth is shockingly at odds with the perception of “the dumb farmer”. Our executive director notes the frequency with which she will sit back in a roomful of farmers during a meeting, only to realize she’s surrounded by PhDs and master’s degrees. In my own experience, farmers are amongst the most voracious readers of books, listeners of podcasts, and followers of world events that I have met, despite the exhausting demand of their day’s work. Farmers are thirsty learners, partially because the career demands it (hence why we began offering advanced training targeted at already successful farmers) but also because their work, as pervasive as the food it creates, touches all things and inspires endless investigation. You can easily see why the curious mind of Thomas Jefferson viewed farmers so warmly.

Is farming an ideal use of a music performance degree or a mind suited to astrophyics? Are farmers always brainiacs? I’m not suggesting a firm answer to either of these questions. I am unwavering, however, in my conviction that agriculture is at least as challenging to the mind as to the body, and that the perception of America’s remaining farmers as low-class citizens is embarrassing, if not a proverbial call to arms. As demand for food production increases, on less land and with dwindling resources and the threats of climate change and dozens of other environmental and economic crises looming, how can we not see that the guardians of our food supply are tasked with one of the greatest challenges in history? That the choice of a career in farming, though not often lucrative, safe, or relaxing, is a noble profession to undertake? That we need farmer-citizens to lead by the force of their conviction and intellect?

Our contemporary food system forces the stewards of our land into the shadows. But we need them now more than ever, for their fortitude, their wits, their instinct, and their passion for their craft. Come out into the light, farmer-citizens, and forget the naysayers. It’s time to grow. Your country needs you.