This week’s blog entry is from a guest writer. Mark Cannon tells us about his experience competing for the first time at our Artisan Cup & Fork Chef Competition in September.
Mark Cannon, Pitmaster at Black Dog Smoke and Ale House, Urbana
I didn’t know what I was getting into when a coworker asked if I might be interested in cooking for an event at the Broadway Food Hall. I said yes primarily out of a desire to take part in something outside the walls of the restaurant – something extracurricular.  I had no idea what the event was.  I was put in touch with Taidghin O’Brien at The Land Connection and found that the event was the Third Annual Artisan Cup & Fork fundraiser.  I was not familiar with The Land Connection and had not been aware of The Artisan Cup & Fork in the two years prior.  I received some initial information about the event and did a little research to familiarize myself with the organization and the event itself.

The Land Connection, I found, is an organization which trains farmers in sustainable farming techniques and seeks to educate the communities the farmers serve about the techniques which help keep our farmland fertile, our air and water clean, and our food healthy and delicious.  They do this through educational programs, sponsorship of local farmer’s markets, and events like The Artisan Cup & Fork.  The Artisan Cup & Fork is a fundraiser built around a competition amongst local chefs preparing dishes using ingredients sourced from local farms.  There would be eight chef/farm teams this year, up from four in 2017, so the event seemed to be successful and growing.  I felt like I had stumbled into something pretty interesting and worthwhile and was happy I had agreed to participate.

While we do work with some of our local farms at Black Dog Smoke and Ale House, the event would be informative and educational for me as well as the farmers and attendees, providing an opportunity to work with farms I was not familiar with and prepare a dish that was not necessarily something we would serve at the restaurant.  Each chef was assigned three farms for their team, though you were not limited to working with just those farms, and I was excited to find out who I would be paired with.  I was paired with Harvest Table Foods in Ashkum for Protein, PrairiErth Farm in Atlanta for produce, and Ludwig Farmstead Creamery in Fithian for dairy.  I had not personally worked with any of these farms previously and I was eager to make these new connections and learn about their operations. 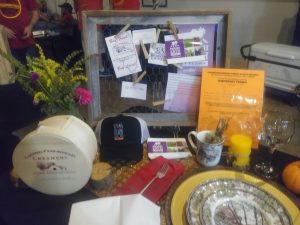 Now it was time to find out what products were available and put together a menu for the night.  After some emails back and forth with the farms, I settled on a menu of Smoked Chicken from Harvest Table with Kickapoo cheese sauce from Ludwig Creamery made with local beer brewed at 25 O’Clock brewing, a sweet potato and butternut squash hash sourced from PrairiErth, and a cherry compote which I used canned cherries for as I wanted an acidic fruit component and the timing was a little late for fresh cherries and a little early for fresh cranberries.  The farms were all very accommodating and easy to work with.  Everyone seemed very pleased to be a part of the event.  Arrangements were made to have the food delivered to the restaurant, my wife Amy and I made a trip to Fithian to pick up our cheese, and before I knew it the event was upon us.I was ably assisted at work by our outstanding kitchen staff preparing everything for the night of the event.  Chicken was brined and rubbed, ingredients for hash were par cooked and portioned, and cherry compote was prepared.  On the day of the event, we smoked and pulled our chicken and prepared the cheese sauce.  I prepared a single batch of hash that afternoon and planned on cooking hash to order during the event – easily the most challenging decision I made in planning for the night.  After a long day at work, it was time to load up the truck and set up at the Food Hall. 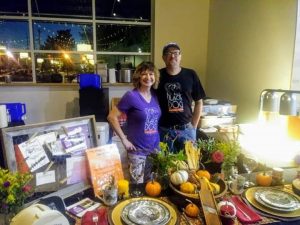 My wife Amy worked the event as my teammate, helping me plan the menu and organize the food and equipment.  We were the first team to arrive, making the very easy one block trip from Black Dog Urbana to the Broadway Food Hall with all of our stuff in a couple of trips.  It was fun to watch the whole operation come together from scratch in the Food Hall that was basically empty when we arrived.  Along with the 8 chef/farm teams, there were local brewers and distillers on hand providing beverages, and a dessert table for those who left room after sampling 8 different dishes through the course of the evening.  The Land Connection staff were friendly and helpful.  The chef teams came from Champaign-Urbana as well as Springfield and St. Joseph, representing a diverse selection of restaurants that included fine dining, tapas, bbq, and food trucks. 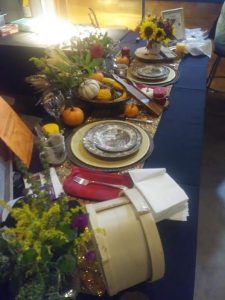 Amy had planned a beautiful table display to compliment the farm to table nature of the event and we had two employees from PrairiErth, Stephanie and Renee, on hand to assist us as well.  They were awesome representatives for the farm and helped us with our set up and stayed and helped to plate and serve through the entire event.  I can’t imagine any other team got such excellent help from their farms, we felt very lucky.  Stephen from Harvest Table Foods attended with his whole family and they all made a point of stopping by our table to mention how much they liked the chicken.  Devin from Ludwig Farmstead was there as well another creamery employee, splitting time between tables, as they had provided cheese for multiple teams.  From the beginning, I saw the event as a showcase for the farms more than the chefs or restaurants, and it was fantastic to see them all involved and well represented during the event.With our display table ready and our warmers full of food, we were ready for service.  The event was well attended, with 200 plus guests to serve over a period of just a couple hours.  I began my first batch of on-site hash and we began serving our dish. 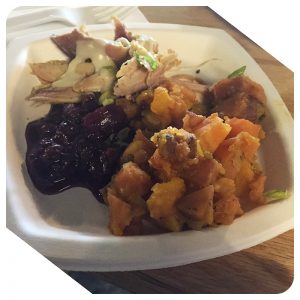 The setup was very casual, with guests going from table to table to sample the dishes in whichever order they chose and nobody stopping them from grabbing a second serving of a dish they were particularly fond of.  I was very happy with our finished product and our service moved very smoothly without much of a wait building up at our table at any time during service.  The hash, as I mentioned, was the one challenge.  I wanted to cook at least one element on site, although I am not sure many other teams did so, and in the middle of service I had trouble finishing hash to keep up with demand and served some with vegetables that were still a bit al dente and felt the product was just inconsistent overall.  In retrospect, I would either not cook on site or simplify the on site cooking to smooth the process out.Two hours later, we had a room full of, I think, very satisfied guests and had participated in what by all appearances had been a very successful night.  There was a judges panel as well as an peoples choice award, both won by Jordan and Aurora Coffey from American Harvest Eatery in Springfield for their lamb meatball with eggplant and hummus with products sourced from Base Camp Farm, Harvest & Blooms Farm, and Prairie Fruits Farm & Creamery.  I did not have an opportunity to sample their dish but heard it was excellent from a number of people who attended.  I am told we finished third in the people’s choice voting which was very satisfying, especially for our first time out.  As I said, the motivation wasn’t really about the judging, but rather to proudly represent Black Dog Urbana and the farms we worked with and I felt we accomplished that.  I am a little jealous, though, as the wining team did win a meet and greet with Chicago celebrity chef Rick Bayless along with a tour of one his restaurants, all provided by Bayless’ Frontera foundation, another fine organization which provides grant money to regional midwestern farms for upgrades and maintenance of their facilities.

Exhausted after breaking down our station and transporting our equipment out, we retreated to Bunny’s Tavern, where my wife works, for a drink with Jordan and Paris Baldarotta of Baldarotta’s Porketta and Sicilian Sausage in Urbana.  They had been at the table next to ours at the competition and were yet another acquaintance and connection that we had made as a result of our participation.  Fans of their food already, it was nice to get to know them and share our experiences of the evening over a drink at the end of an exhausting but very fulfilling day.  In the end, this was a great experience, with great food and new friends, that I am thrilled to have been a part of.  I look forward to participating again in the future if I am lucky enough to be invited back.

If you are interested in your article or blog entry being featured on the TLC blog, contact nicole@thelandconnection.org.