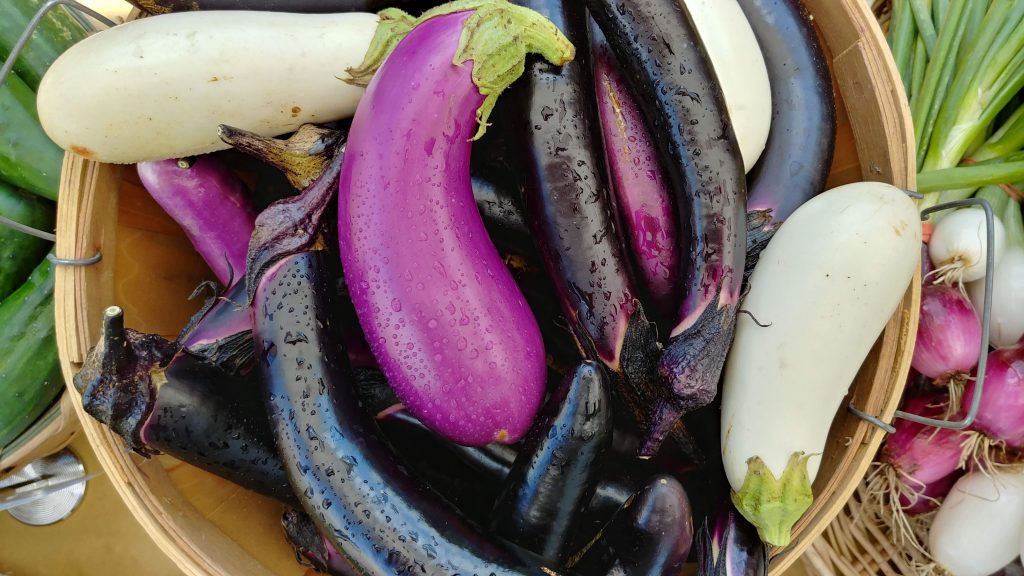 First recorded in 1763, the word “eggplant” was originally applied to the small white fruit/cultivars that look like eggs. Whereas eggplant was coined in English, most of the diverse other European names for the plant are derived from the Arabic word bāḏinjān. Bāḏinjān is itself a loan-word in Arabic, whose earliest traceable origins lie in the Dravidian languages. The Hobson-Jobson dictionary comments that ‘probably there is no word of the kind which has undergone such extraordinary variety of modifications, whilst retaining the same meaning, as this’. Thought to have originated in India, eggplant has been cultivated since pre-history all over Asia and is a staple in many Asian, Middle Eastern, and Mediterranean cuisines. Part of the nightshade family, the fruit was at one time thought to be extremely poisonous.

Raw eggplant is composed of 92% water, 6% carbohydrates, 1% protein, and negligible fat. It provides small amounts of a wide range of essential vitamins and minerals, with manganese being the most plentiful. Vegetables in the nightshade family contain some amount of the toxic substance solanine, however, you would have to eat roughly 36 raw eggplants to reach any sort of hazardous level. They are naturally low in calories and unpeeled, they provide some fiber. There is also some folate and potassium. Minor changes in the nutritional composition can vary with seasonality, growth environment, and genotype.

When buying eggplant you want to make sure that you get ones that are young. Size, however, is not always an indication of maturity. To test, hold the eggplant in your palm and gently press it with your thumb. If the flesh presses in but bounces back, it is mature. If the flesh is hard and does not give, the eggplant is immature and too young to harvest. If the thumb indentation remains, the eggplant to over-mature and could be completely brown and bitter inside with large, tough seeds. Also, eggplants have a dimple at the blossom end. The dimple can be very round or oval in shape. The round ones seem to have more seeds and tend to be less meaty, so select the oval dimpled eggplant.

Eggplants bruise easily so handle them gently. Also, eggplant is best when it’s fresh as eggplant does not like cool temperatures and therefore does not store well. If you must store them, you can store eggplant unrefrigerated at cool room temperature, or in the hydrator/crisper drawer of a refrigerator for a few days. Be careful not to store them in a refrigerator for too long as they will quickly develop soft brown spots and become bitter. Use them while the stem and cap are still greenish and rather fresh-looking. No matter how you store them it is always a good idea to wrap them in plastic or place in a plastic bag.

For long-term storage, roasted or cooked eggplant, and dishes made with it including ratatouille and baba ghanouj freeze very well in airtight containers or freezer bags. Eggplant is not suitable for drying or canning, though you can roast and then store eggplant in olive oil. Beyond that, freezing is the best method for home preservation.

Wash the eggplant under cold water and gently wipe off the skin. If you need to break down the eggplant into cubes or slices you can chop the top of the eggplant off to remove the crown and stem. When you’re cooking halved or the whole eggplant, however, you’ll typically leave the crown on. Eggplant can be peeled, but peeling is not essential. It depends on personal preference and the desired dish. Typically the skin is thin and does not have a bitter taste. Peeling should depend on how the eggplant is used in the recipe. If you never peel, selection becomes extremely important. Young tender eggplant is a must as older tough skin takes longer to cook and by then the flesh is overcooked.

To remove any acrid flavors from the seeds and excess moisture, lightly salt slices, halves, or cubes of eggplant and let them sit in a colander for 20-30 minutes. Beads of water will appear on the top of the flesh as the liquid is pulled out. This is called degorging. Doing this also reduces the water content which, in turn, reduces the amount of water leeched out into the dish. If you salt prior to cooking, rinse and pat dry to prevent excessive salt in the end product. Adjust the seasoning in the recipe to compensate for the salt remaining on the eggplant. Don’t press the eggplant too much because forcing air out of the eggplant will cause it to soak up less flavor from the dish. Obviously, you don’t degorge the eggplant if you’re cooking it whole.

Here is the fun part, cooking. Interestingly enough, eggplant is one of the only vegetables you’ll encounter (at least that I can think of) that you won’t really see prepared raw. Here are some of the common ways to cook eggplant.

Grilling: you can grill eggplant in almost any form. Whole, halved, sliced, and cubed. Gently coat half-inch slices with olive oil and sprinkle with salt and pepper. Place on the grill and flip after a few minutes. If you’re grilling halves leave them on for a bit longer so they cook all the way through. Be careful though because if your grill is really hot the eggplant will soften up quickly and be a nightmare to flip or pull from the grill. You can also put sliced or cubed eggplant on kebobs to grill. When grilling the whole eggplant, place n the hottest part of the grill and really get a nice char all over. You want to make sure the eggplant is cooked all the way through, which can take a while. You can even put the whole eggplant directly in the coals to char it for baba ghanouj.

Roasting: prick the whole all over with a fork and bake at 400°F for about 30-40 minutes until the flesh is tender and skin is charred. The flesh can then be pureed and used in soups, dips, or sauces. It can also be frozen for later use. Cubes or slices can also be roasted though less time is needed. Oil and season eggplant slices or cubes and spread out on a baking sheet and roast at 400°F for about 15 minutes or until fork-tender.

Steaming: leave eggplant whole and place in a pot with a steamer basket. Cover the pot and let the eggplant steam over an inch of water for 15-30 minutes depending on size. You can then cut the eggplant in half and scoop out the flesh to make dips or slice/cube and toss with olive oil, salt, and pepper, or cover in tomato sauce.

Stuffing: slice the raw eggplant in half and scoop out the flesh. When scooping the flesh out, make sure to leave some so the skin holds its shape when baked. Cook the flesh you removed  (typically by boiling, steaming, or roasting) and add desired spices and other ingredients to cooked eggplant. Stuff the skins and bake at 350°F for 40-60 minutes. Cooking time will depend on the size and amount of filling.

Sautéing: slice or cube the eggplant and season as desired. Sauté with olive oil until some nice caramelization (browning) occurs and the pieces are tender. You can sauté eggplant on its own or add other vegetables to it for stir-fries, sauces, etc.

Frying: dip slices in a favorite batter and lightly fry in vegetable oil. You can also fry eggplant whole.

Saveur – The Best Eggplant Recipes from Around the Globe 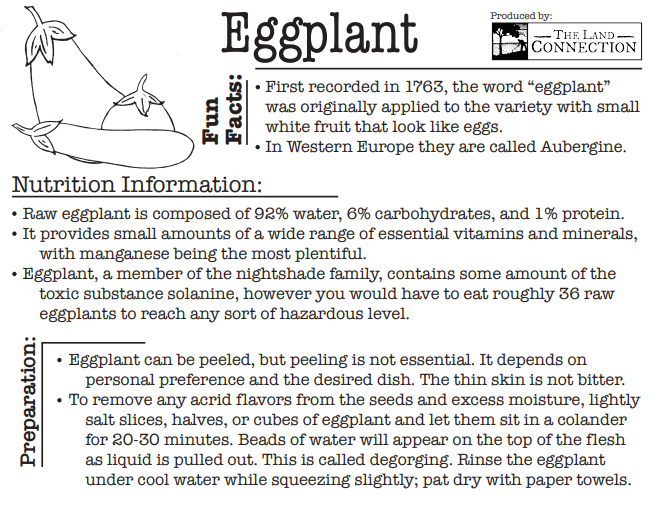