Now, this section could be a several volume book series on the interesting and fun facts about flowers. In the interest of time, let’s just focus on a couple that I find interesting. Tulips, part of the lily-family, were originally cultivated in Persia around the 10th century. In 17th-century Holland, after tulips were introduced to Western Europe, tulip bulbs were more valuable than gold.

Roses, on the other hand, are in the same family as apples, pears, raspberries, almonds, cherries, and plums. Rose hips, petals, and buds are all used around the world for different cooking applications, including the making of Rose Water which is heavily used in Middle Eastern cuisine.

And just because statistics are fun, and to drive home the fact that California produces everything, almost 60% of fresh-cut flowers grown in the U.S. come from California.

While 60% of fresh-cut flowers grown in the U.S. come from California, almost 80% of fresh flowers sold in the United States are grown in Colombia, Ecuador, Mexico, the Netherlands, and Israel. Shipping flowers from those countries to the United States incurs huge transportation, energy, refrigeration, and storage costs, leaving an enormous carbon footprint. This same argument can be applied to flowers grown in California. The distance from central California to New York City is about the same distance from Quito, Ecuador to Houston, Texas. Distance is distance, just because it crossed an international boundary, doesn’t mean that it incurred a larger carbon footprint. What this all boils down to is, buy flowers locally.

Imported and long-haul transported flowers may also carry the residue of chemical pesticides or fungicides with them. Also, imported flowers are often cut a week or more before they arrive in a consumer’s hands. During this time, quality and vase life decline. In addition, many commodity-type flowers have been bred for uniformity, usually losing their natural fragrance in the process. Locally-grown flowers are produced in greater varieties, providing a wide range of colors, forms, and scents (so they smell better). There really is no reason not to get your flowers from a local grower, especially when there is a great supply of them. Flower farmers are still farmers, and they want to tell you about their business, how they grow things, what their philosophy is, and how they encourage and protect pollinators and their habitats.

So, you’ve just purchased flowers from the farmers market or co-op grocery store. How do you keep them beautiful? First, Cut at least 1/2 inch off of each flower stem and put in fresh water in a very clean container. The water should be just above room temperature, but not too warm. The flowers should not be too constricted by the vase, as this can lead to mildewing in the vase, especially if you don’t change the water frequently. You can also add a crushed up regular Aspirin to your water to make your flowers last longer. Though if you change the water frequently you’ll obviously have to add more crushed aspirin each time you change the water. Keep away from direct sunlight and drafts, change the water daily, if possible, and remove blooms as they wilt.

There are some really wonderful flowers out there that are edible and can be used to brighten up dishes and drinks all year round. Some common edible flowers include nasturtium, bachelor’s buttons, marigolds, calendula, roses, lavender, bee balm, sorrel, honeysuckle, mint, oregano, thyme, cilantro, dill, squash blossoms, borage, and chives. They can be enjoyed fresh in salads, iced tea, or cocktails; or added to butter and baked goods (typically after being dried). One thing that I love to do is add fresh blossoms or herb leaves to ice cube trays, fill the trays with water, and put them in the freezer. You then have ice cubes for summer cocktails, wines, sangria, teas, water, or spritzers. Get creative!

There are a few ways that people typically like to store or preserve flowers. Petals and buds can be dried and used later, or stored fresh for later use.

Dehydrating: Harvest individual blooms or petals and place on dehydrator screens in a single layer. Set dehydrator to 120°F and let it run for several hours. Check progress frequently and remove dried blossoms or petals.

Storing Fresh: Place fresh blossoms loosely in a Ziploc bag with a damp paper towel and blow air into the bag before sealing it so the blossoms don’t get crushed. Place the bag in the refrigerator for 1-2 weeks.

To dry flowers to use in dried flower arrangements, strip excess foliage from flowers and cut stems to the desired length. Hang flowers upside-down from a hanger, either individually or rubber-band the stems together. Hang in a dark, dry area with good circulation. Leave flowers for two to three weeks until completely dry. Remove from hangers and spray with unscented hairspray for protection. 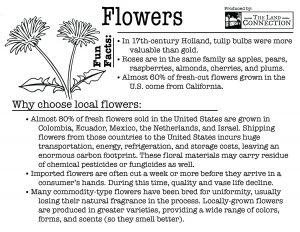