When I go out on hot summer days, I often trade my bottle of water for a cool cucumber—or two, or three. The clean flavor and crunch make cucumbers much more satisfying and thirst quenching, not to mention more nutritious, than plain old water—or even newfangled vitamin water.

A TALL, COLD…CUCUMBER?
Because cucumbers are mostly water, they are refreshing and cooling. Once thought to be largely devoid of nutrients, food scientists have found that cucumbers do in fact have significant amounts of nutrients, especially in their skins. For starters, they contain vitamins C and A, folic acid, iron, potassium, manganese, and silica. Silica works synergistically with calcium and vitamin D to increase collagen production, promoting healthy skin and connective tissue—so go ahead and put those cucumber slices on your eyes like they did in the old movies!

HEALTHY INSIDE AND OUT
In addition, cucumbers are a good source of molybdenum—which is not only fun to say, but is vital for many brain functions, including memory. Finally, cucumbers are one of the very few vegetables that contain the amino acid tryptophan, which can convert into the neurotransmitter serotonin, and may function as a natural mood-lifter and appetite-curb.

QUICK AND EASY TO PREPARE
Local farmers often grow heirloom cucumbers, bred for flavor, not for travelling long distances or staying on store shelves for weeks. These varieties have thin skins, and are super-easy to prepare. Try slicing them for sandwiches or salads, or eating them on their own, like an apple or carrot. Here are a few quick serving ideas:

And, yes, water makes up 90 percent of a cucumber’s weight, which makes them low in calories and good for making sure you’re hydrated. So instead of toting a bottle of water this summer, carry a crunchy cucumber from your local farmer! 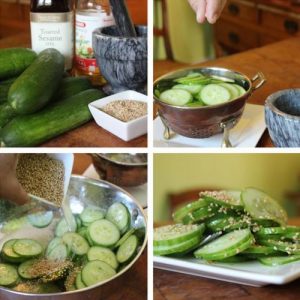 Seasonal Cook’s Notes: You can use any variety of cucumber for this salad, but the long, thin Japanese or English cucumbers have thin skins, and fewer seeds.