I’ll never forget the simple grilled radicchio I had in Rome at a restaurant up the hill behind the Coliseum.

It took me a while to realize that the soft, meltingly delicious vegetable soaked in olive oil was something I had indeed eaten before. And so have you, if you’ve ever had a mixed green salad with crunchy bits of burgundy and white leaves.

RADICCHIO NUTRITION
Although a relative newcomer to local markets, people have been enjoying radicchio for millennia. Pliny the Elder praised its healing properties, saying it could be used as a blood purifier and a sleep aid. We now know that radicchio does contain:

Intybin, a mild sedative and analgesic pain-killer
Lots of flavonoids and anthocyanins, powerful anti-inflammatory and anti-oxidants agents, which may help prevent cancer and neurological diseases
It’s true that radicchio is almost always described at a “bitter green.” But don’t let the word “bitter” put you off. It has an edge, yes, but just beneath is a sweet earthiness that quickly becomes addictive. And when radicchio is cooked, the bitterness almost disappears entirely.

IDENTIFYING TYPES OF RADICCHIO
If you take a quick glance at the bountiful greens at your local market, you might easily mistake radicchio for red cabbage because the most common variety, Radicchio di Verona, makes a round head of maroon and white leaves.

RADICCHIO RECIPE IDEAS
All varieties of radicchio have sturdy leaves that can be eaten raw–with just a bit of olive oil and salt–or cooked into a lovely risotto or pasta dish, or slowly braised with a beef roast or a chicken.

Simplest of all, cut a head of radicchio in half, brush with olive oil, and grill until soft. Dressed with a drizzle of balsamic vinegar and a shaving of parmesan, you will imagine you are dining in Rome, just up the hill behind the Coliseum. 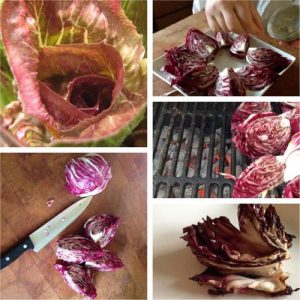 When people think of grilled vegetables, they don’t often think about grilling a leafy green. But Radicchio has the texture and body needed to stand up to the dry heat of a charcoal or stovetop grill, its pleasing bitterness nicely contrasting with the mild oil used to keep it from sticking and burning. Serves 6 as a side dish. By Terra Brockman, Photos by Cara Cummings