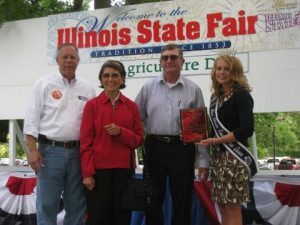 “I was a missionary in Vietnam for three years and came back with my new wife and a desire to farm,” says Ron. Angie didn’t grow up on a farm, but took to it with enthusiasm, according to Ron.  At first she just wanted to grow the herbs she was used to using in her home country, but she then began growing other produce that was popular at area farmers’ markets.

The Ackermans’ organic farming life began over 30 years ago with an experiment. Ron decided to plant a 40-acre field of corn with manure as the only fertilizer. The same year, he applied varying amounts of conventional nitrogen fertilizer to his other fields. After the harvest, Ron found that the difference in yields between the field with manure compared to the one with the most fertilizer was only 10 bushels. The conclusion was obvious: he was throwing money away on anhydrous ammonia fertilizer.

Thus, he began a transition to certified organic farming, foregoing herbicides and non-organically approved insecticides.   Ackerman says his fields sometimes yield less than neighboring grain farmers who use chemical inputs, but he still nets about 50 percent more because he has almost no input expenses. He says this is what brings him the profit that allows him to continue to farm. This knowledge and dedication to the land and to healthy food is what the Ackermans share with the CIFB students that they mentor.As mentors, Ron and Angie help to train a new generation of farmers in sustainable practices through hands-on fieldwork as well as thorough communication. Their work helps to a build a confident and successful generation of new sustainable farmers.  The Ackermans grow and sell fresh and frozen herbs and produce, including a plethora of fresh vegetables, rhubarb, garlic, and organic fruits including cherries and hard-to-find organic apricots.  They also produce and sell edible flowers, flower bouquets, whole grain wheat, soybeans and oats, wheat and oat flour, corn meal …and more! 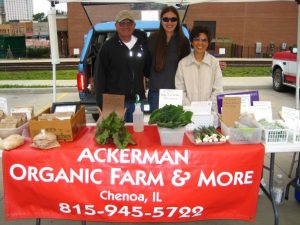 Ron and Angie used the NRCS EQIP program to partially fund one of their hoop houses, which extends their growing season and allows them to take advantage of year-round markets. They market their products on the farm, at the downtown Bloomington Farmers Market, the Common Ground Grocery in Bloomington, Naturally Yours Grocery in Normal, and at various winter markets including the McLean County Museum of History and the Illinois Sustainability and Wellness Expo.

Ron is also a past chairman of the Midwest Organic Farmers Co-op Board of Directors.  The purpose of the Midwest Organic Farmers Co-op is to serve their over 100 members by promoting organic systems in agriculture, education, public policy, and the favorable marketing of organic products. Ackerman Certified Organic Farm and More has hosted numerous tours on their farm where visitors have seen how to use diversity and local markets to create a productive and profitable farm that grows fresh, healthy food sold directly to local people. “We just want to say we are proud to be organic farmers,” says Ron.  “We decided to go this road because we want to grow good food for ourselves and for our friends and neighbors as well. It is a lot of hard work, but we make a commitment to be kind to the land God gave us so it will be in good shape for generations to come.”