We at The Land Connection love a good story, especially when it’s true. This year’s Farm Beginnings course let us welcome yet another stellar class of beginning farmers to the farm, and among them were Tony and Danielle Grant of Danvers.

Tony Grant and his family started their experience with The Land Connection in 2012 with a newspaper article. “I believe it was a spotlight on Terra Brockman in the Pantagraph”, says Tony. The article also mentioned a Farm Dreams workshop taking place in Bloomington, where The Land Connection used to have its headquarters. “We were ready to make the next move and start in the direction of having our own farm.”

The Farm Dreams workshop is a four-hour workshop that shows community members what a life in farming can be like, clarify the values that inspire their farm dream, and determine whether or not they are ready to turn that farm dream into a reality.

In the end, Tony took the workshop twice, and it was the second time around that really confirmed their plans. “Farm Dreams showed me where I have room for growth and helped me put together the vision of what I wanted.” He notes particular aspects of the workshop that helped him clarify that vision, such as when participants are asked to choose one word to describe their farm dream, or to draw the map of their ideal farm landscape. 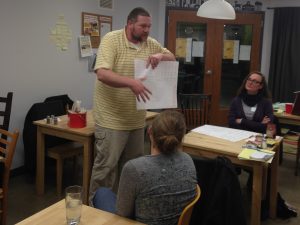 Tony Grant explains his farm map drawing to the other students in the Farm Dreams workshop in Champaign last April.

At the time, he and his wife were also trying to decide if they were ready to dive into The Land Connection’s Farm Beginnings course later that year. “Farm Dreams showed me what the Farm Beginning class really is and allowed me to get my arms around what I’d get out of the class.”

In the end, the Grants signed up for Farm Beginnings and, over nine class sessions from October to March, they crafted a business plan for Fat Hill Farm. Never ones to dilly-dally, they also welcomed their third child, Abigail, to the world on March 2nd!

With several workshops, the Farm Beginnings course, and a growing family, the Grants are now ready to begin a mentorship with two farmers in the Bloomington area, as well as begin farming on land owned by Eric Marshall, a 2009 graduate of Farm Beginnings whom Tony first met during the Farm Dreams workshop.

“We’re taking a first step this year,” he says. In addition to growing peppers to put in their smoker, the Grants hope to grow salad greens to sell at the Bloomington Farmers Market and also to have a “simple CSA”. “We hope to get a few friends of the family and some others from our community [for the CSA]. We’re just looking for five to ten people to start.”

If you’re dreaming of having your own farm like the Grants, our Farm Dreams workshop is a great place to start your story. Our first workshop is on April 13th at Prairie Fruits Farm and Creamery in Champaign. We are also set to hold Farm Dreams on June 8th in Decatur and June 29th in North Salem, Indiana, and are scheduling others in Bloomington, Peoria, and Springfield. We hope you’ll join us!