This is the afternoon of the fourth day in my new position as Farmer Training Program Manager with The Land Connection. First let me tell you why I love this work and why I’ve insisted on this career path, this mission, for the past several years, and why I will continue to do so. Then, let me tell you about the work that I’ve just begun and what we as an organization have in store.

A love of plants has presided over my whole life. I recall getting down on my hands and knees in the playground in kindergarten to look at a lamb’s ears plant I found and calling everyone over to marvel at it with me. The reaction, as I tried to tell everyone how cool it felt between my fingers, was not fascination but vague discomfort. Still, I would not be deterred. 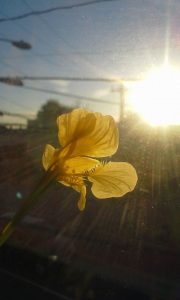 Hungry nasturtium soaks up the winter sun at my old house in Portland, Maine.

This fascination with the plant kingdom continued into college at the University of Maine. But it soon became clear that, first, I was not very good at horticultural design, and more importantly, my heart was not in it. I was becoming involved in social justice activism, participating in anti-war rallies and working to get Fair Trade coffee onto campus, and my concern with the state of human rights was holding sway against the drudgery of detailed landscape sketches. Eventually the true crossroads of people and plants became clear to me: farming. I figured this out a little late and finished my horticulture degree, but by the time I was done, my focus was off the lawn and out in the fields.

I thought that when I began my graduate studies at Tufts’ Friedman School, I was going to study urban agriculture. But even as I pursued that path, something still wasn’t quite right. I began to see gaps in how we were learning about food, in what we were being taught about agricultural practice, and the role of the consumer. There was no particular player at fault. It was me, it was the educational system, it was farmers, politicians, consumers, everyone. Everywhere I looked there were misunderstandings about our food system, and more disturbingly, a lack of willingness to really learn, to face facts and challenge common thinking. By the last year of my time in Boston, I knew that agricultural education was where I needed to be.

I’m now in my fifth semester of undergraduate teaching on food systems (now on-line, through Great Bay Community College in Portsmouth, New Hampshire), and I’ve spent the past several growing seasons learning the art and practice of farming. I feel I still don’t know enough. In fact, I know I will never know enough about farming and food to be satisfied. It’s a beautiful, bottomless well of learning about the earth, the mind, the body, the self and the other, and it’s an absolutely vital examination. 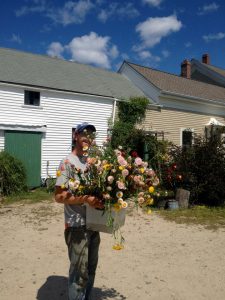 Cultivating the earth to grow the ingredients of food and fiber and fuels is a joy and an honor that has been ill-respected for a very long time. This is remarkable because it takes a fertile mind, a steadfast body, and a resolute heart to be successful and sustainable in this practice. The life of a farmer is admirable, at times truly unenviable, and in the end always critical to the human race. And yet due to the endless work, the myriad difficulties, and the disregard of the general public as bitter icing (though this seems to be evolving of late), farmers, and the knowledge base that makes their work possible, are becoming rare indeed. It is this knowledge, more than pesticides or fertilizers or tractors, that is the most critical input to a more sustainable agricultural system. And hence, why I am so pleased to have begun this work with The Land Connection.

The Land Connection has a program called Central Illinois Farm Beginnings (CIFB). This is my new charge.  Ordinary people, many like me who have no farming in their personal history and little in their blood, are going back to the land. But these aren’t the efforts of the back-to-the-landers, the communes and the vaguely-conceived retreats of half a century ago that largely faded into obscurity even as their members faded back into the corporate world. These are entrepreneurs. They are people who are tired of the rat race or who know they shouldn’t start running it, or who want to unplug their acres from the industrial standard, who have a plan to grow food and to be sustainable. Remember that sustainability is not just about the earth, but also about oneself. These people have a plan, and they may help to know how to grow food, how to get on some land, how to find a mentor, and how to start farming. That’s a commitment; these people are serious!

Our job here is to help them to get started. There are a lot of moving parts that we crank. My cog is the training. I won’t be doing all the teaching, but some. My job is to facilitate, to make sure these new folks have a clear plan for learning, for preparing, and for doing. Also, perhaps more important than my teaching, is making sure that these prospective farmers have access to mentor farmers who know the ropes, who they can stay in touch with, who can guide them past the landmines of bad marketing decisions and poor weed management, and maybe even be a shoulder to cry on when the squash bugs have become too much. So, one of my roles is to get people connected. You want to grow flowers and herbs and sell them wholesale? Let’s find you a mentor. You want to start an orchard and graze pigs it in to eat the drops? Let’s find you a mentor. Organic grains? Tomato starts? Know how to grow but can’t operate a spreadsheet? Let’s find you a mentor. 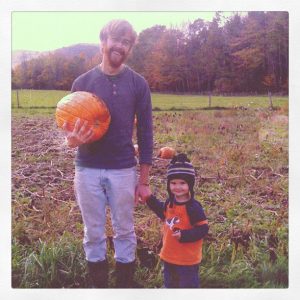 With my nephew in the pumpkin patch at the New Hampshire Farm Museum. (photo credit: Ryan Brooks)

Over the next year we’ll be expanding beyond CIFB. Currently it’s a series of winter-long workshops, every other Saturday. You learn how to write a business plan, develop your enterprises, work on finding land, practice your farm-legalese, and make a mentorship plan to guide you through your first growing season. Now, we’re scaling up. In the works are three intensive, multi-day workshops spaced out over the course of the next growing season, for both farmers and wanna-bes alike, to really sink their teeth into an aspect of farming with the help of some of our farmer partners who really know a thing or two. We’re also expanding our Farm Dreams workshops, a series of evening workshops starting in early April, to get potential new farmers, and the interested public, informed on what it takes to start a farm business and what the life of a farmer can really be, in all its joys and decisions. Finally, we’re getting started on farmer incubation. No, we’re not growing farmers in jars. We’re working on arrangements with local farmers to lease small parcels to our graduates, creating a close relationship between beginning and advanced farmers that gives the beginner easier access to markets, land, and knowledge. We’ve arranged one lease like this so far and we feel hopeful there are more coming down the pike. Keep up to date with us on our website, thelandconnection.org, where you can also sign up for our free e-newsletter, The Weekly Harvest.  We don’t want you to miss a thing!

It’s now close to the evening of my fourth day with The Land Connection. I’ve spent a while talking about myself and not doing all the things that I claim to be doing. It’s time to grow. I’ve got a lot of work to do, and I’m excited for a big year. I look forward to telling you more about it in the weeks and months ahead.