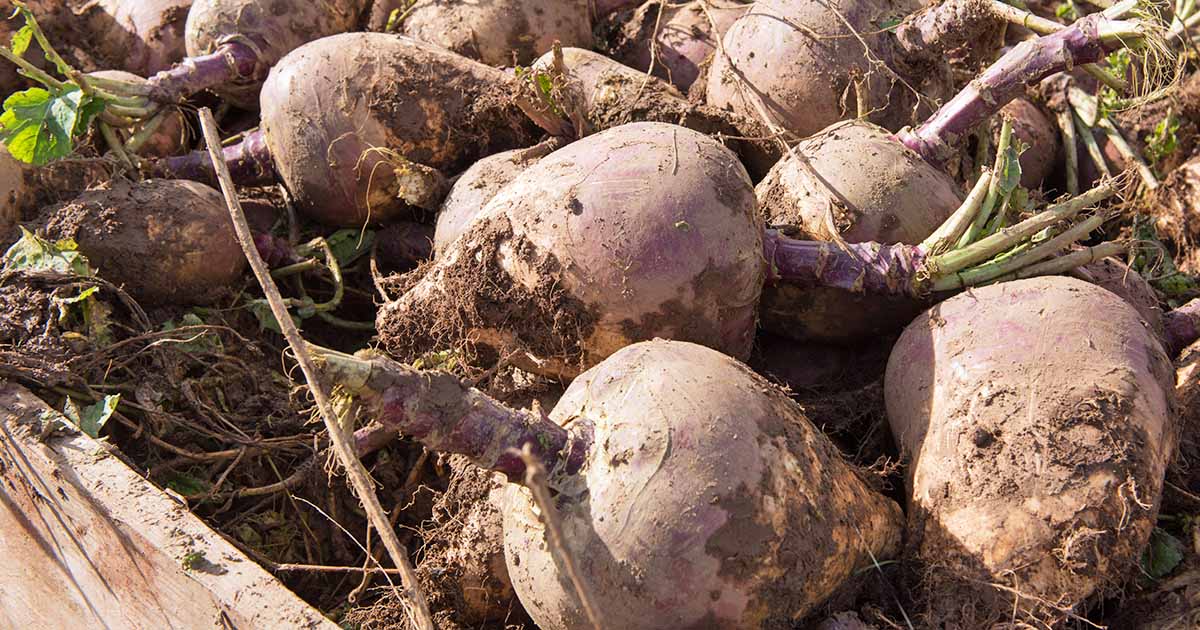 I’m going to be completely honest with all of you. I have only cooked with rutabaga a handful of times and it was always as part of a roasted root vegetable side. Nothing interesting, creative, or unique. Nothing I would particularly want to write home about. It’s embarrassing, I KNOW! I’ve always viewed it as the less interesting root vegetable that I didn’t bother to pay attention to or learn anything about. Turns out I have been missing out on a LOT.

Not only do rutabagas have a very interesting history in Europe, but they also carry a lot of baggage. During WWII they provided the only nutrition many POWs and residents of various ghettos in Europe had access to. I also learned that part of my earlier blog about turnips was slightly incorrect. Rutabagas were the “turnips” that the Irish, Scottish, and British would carve to ward off evil spirits during Halloween. Which makes more sense because, given the size difference between rutabagas and turnips, it would be much easier to carve rutabaga. The confusion comes from the fact that rutabagas are considered in many regions to be large turnips, even though they are not.

So, now that we cleared up some of my previous misconceptions, and some general confusion, I think we can dive into this amazing root vegetable and see what we’re missing.

Rutabagas are considered to be a variety of turnip in many locations and are often referred to as turnips, but they are in fact a cross between a turnip and a cabbage, just as kohlrabi is. Rutabagas are bigger in size, have a rougher texture, and are sweeter than turnips. That being said, some people with a particular gene relating to the perception of bitter tastes may find that rutabaga, as well as several other vegetables, are too bitter to be palatable. Rutabagas are more popular in regions like Scandinavia, Ireland, and the United Kingdom because they grow better in colder climates. The name “rutabaga” comes from the Swedish word rotabagge, which means “baggy root.” Rutabagas are also commonly referred to as Swedes, Neeps, or Swedish Turnips.

Rutabagas are high in carbohydrates, vitamins A and C, and several minerals, particularly calcium. Rutabagas also provide a decent amount of a variety of B vitamins. Rutabaga greens are similar to turnip greens and are a good source of vitamins K, A, C, and B complex, as well as the minerals calcium and manganese.

Rutabagas are the freshest when you find them with their greens still attached, though it is relatively rare. This means that they were harvested recently (and locally) as the greens will be removed for long-term storage and transport so keep that in mind when shopping for them. The greens can be eaten, though some people will just tell you to discard them. I’ll leave that up to you. Try cooking the greens as you would turnip greens and see what you think. If you’re using both the greens and the root, make sure to get rutabagas with healthy greens and avoid mushy or yellowed greens. Greens should be wrapped in a damp paper towel or placed in a plastic bag in the crisper drawer of your refrigerator. Use the greens as soon as possible.

Rutabagas are pretty resilient, so a little damage to the root is nothing to worry about and can be cut out. Check for major soft spots on the root and if there are any, cut those out before storing. Remove the greens and store rutabaga at room temperature for up to 1 week, or refrigerated in a plastic bag or crisper drawer for up to 1 month. If you got your rutabaga at the grocery store it may be covered in a thin layer of wax to prevent it from losing moisture (this is also true with parsnips) in which case you will not need to wrap it in anything when storing it in your refrigerator. For longer-term storage, rutabagas (with the greens removed) can be packed in moist sand and kept in a cool (but not freezing) location, like a root cellar.

If you are buying rutabaga from a local farm, you’ll probably need to remove some remaining soil before cooking. Scrub rutabagas vigorously with a vegetable brush to remove any remaining dirt. Rutabagas may have a tough outer skin and can be peeled using a knife or a peeler. When removing the skin it may take a couple passes to get through the skin to the heart of the root. To get the most nutrition out of your rutabagas you can refrain from peeling them if you choose. Peeling local or fresh rutabaga comes down to your personal preference…to peel or not to peel, that is up to you. If you buy your rutabaga from the grocery store and it has been commercially waxed you will need to peel it.

Raw: slice or grate rutabaga and add it to salads, use it in slaws, or shave it for sandwiches. You can use it in a winter slaw with celeriac, daikon radish, and apple.

Steaming: cut into 1-inch cubes, place in a pot with a steamer baster over an inch of boiling water, cover, and steam for 30-35 minutes, or until thoroughly tender. Season with salt, pepper, butter, and herbs and eat as a side dish.

Boiling: cut into 1/2- to 3/4-inch cubes, drop into a saucepan of boiling water and cook, uncovered, for about 15-25 minutes, or until tender.

Roasting: cut into 1-inch cubes or chunks, toss with melted butter or oil, season as desired, spread them out on a baking sheet in a single layer, and roast them at 425°F for 30-50 minutes. Make sure to check them at 30 minutes and then every 5-10 minutes after that until they are golden brown and tender.

Frying: cut into thin slices, and carefully deep fry in a pan of very hot vegetable oil until golden brown. Do not crowd pan while frying and fry them in batches if necessary. Drain on a paper towel, sprinkle with salt and pepper or the seasoning of choice, and serve. You can also cut rutabaga into fries and fry them as you would potatoes for “french fries.”

Pureeing: boil rutabaga and then place in a food processor or blender with heavy cream of chicken stock. Season as desired and puree until smooth. Rutabaga puree can be used in soups or frozen for later use.

Rutabaga and Sweet Potato Mash with Garlic and Sage