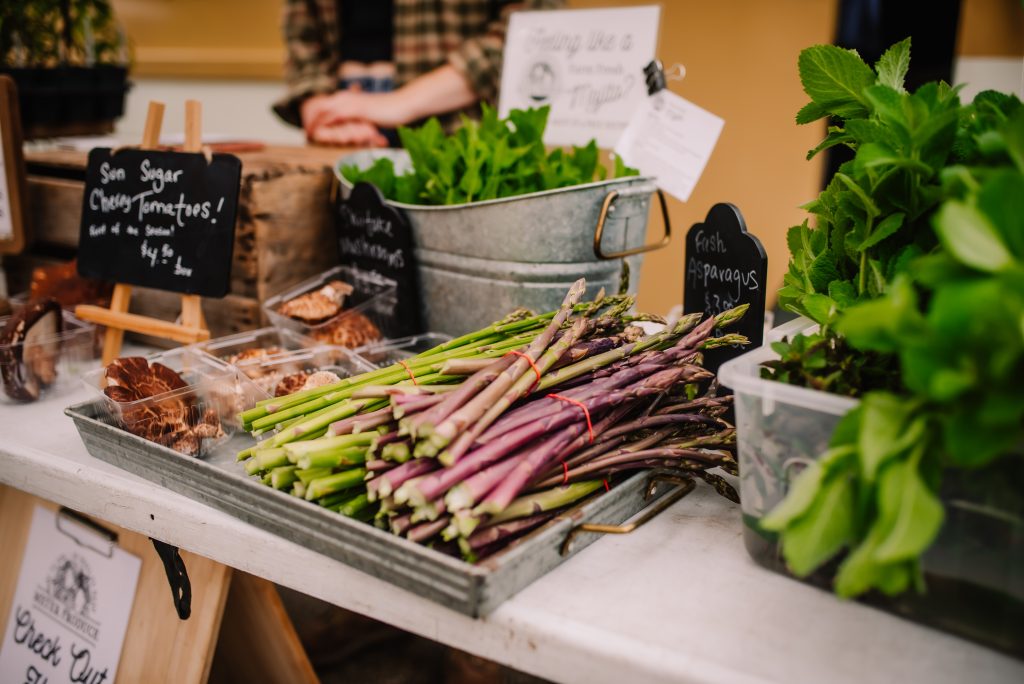 One of the very first signs of Spring in a vegetable garden is the appearance of tender shoots of asparagus. Unfortunately, the season for this herbaceous, flowering perennial plant is very short, just a few weeks or a month, if you’re lucky. Make sure to track down local asparagus from local farmers, friends, and neighbors! Once the season has passed, you can always find it in the grocery store.

Asparagus (Asparagus officinalis) is related to garlic, onions, and other members of the lily family, though asparagus is no longer classified as part of the lily family (Liliaceae). In fact, the lily family has been split and the onion-like plants are now in the family Amaryllidaceae and asparagus is in the family Asparagaceae. Though typically green, there is also white asparagus, which is kept white by mounding earth around the plant as it grows—a technique called blanching. With no access to sunlight, the asparagus stays white and is considered more tender.

Asparagus is low in calories, containing no fat and approximately 35 calories per one-cup serving, and very low in sodium. It is a very good source of dietary fiber, protein, beta-carotene, vitamin C, vitamin E, vitamin K, thiamin, riboflavin, niacin, folic acid, iron, phosphorus, potassium, copper, manganese, and selenium, as well as chromium, a trace mineral that enhances the ability of insulin to transport glucose from the bloodstream into cells. Raw asparagus also ranks highly in vitamins A, B-complex, and C, though during the cooking process some of the B-complex and C vitamins are lost.

When looking for asparagus, seek out firm stalks without wrinkling. Stalks will vary widely in width which is only an indicator of age. Pencil-thin stalks are much younger than thicker ones and are typically much more tender. Thinner stalks also require shorter cooking times and tend to be less woody. After purchasing asparagus, wrap in a damp cloth and store in the vegetable/crisper drawer, or, bundle spears with a rubber band and place upright with the cut ends in a container with an inch of water. This will keep the spears vital until you can use them. Refrigerate immediately and use as soon as possible as asparagus’s sugars will turn rapidly to starches, reducing flavor quickly. Asparagus can also be pickled and stored for several years.

Before cooking asparagus rinse the spears in cold water, dry, and cut or snap the bottoms of each spear off. Snapping the base is a technique used to remove the woody part of the asparagus as the spear will snap where the asparagus turns from tender to woody. Just bend the spear near the base and you should be able to snap it pretty easily, no knife required. If using this technique you may lose significantly more of the spear than if cutting the bottom. To avoid losing too much of the spear you can cut a small amount off the bottom and then peel the woody part before cooking. Thinner spears will not need much, if any, removed. An easy trick for a bunch of pencil-thin asparagus is to take the entire bunch of asparagus (with the rubber bands on) and simply cut ½-inch to 1 inch off the bottom of the entire bunch with a larger knife. White asparagus must be peeled before cooking.

Asparagus on its own is best cooked simply:

Blanching/shocking – Boil water using an electric kettle, stove-top kettle, or in a pot on the stove with some salt. Place spears in a bowl, saucepan, or baking dish and cover with boiling water. Let the spears sit in the water for 2-5 minutes. 2 minutes for super-thin spears and 5 minutes for thick spears. Asparagus should be tender and bright green when it’s ready. At that point, strain asparagus and run under cold water or submerge in ice water to halt the cooking process. This is called shocking. The entire process of blanching is used to reduce the loss of quality over time while maintaining flavor, color, and nutritional value.

Steam – Use a steamer basket in a tall pot. Put about an inch of water in the pot and bring it to a boil. Place the asparagus upright in the pot and put the lid back on. Steam asparagus for 10 minutes or until tender (depends on thickness). You can also steam asparagus on its side if you don’t have a tall pot, but it can cook unevenly so just be careful and rearrange the spears every so often with tongs to prevent the ones on the bottom from getting overcooked.

Sauteéing – Heat a tablespoon of oil or grease (bacon fat works very well) in a skillet or saute pan. Place whole spears (this will require a wider pan) or cut asparagus in the pan once the oil is hot. Sauté the asparagus until tender. Some browning is always good.

Roasting – Arrange spears on a baking sheet (spread them out so you only have one layer), drizzle with olive oil, sprinkle with salt and pepper and roast in the oven until the skin starts to crisp and appears slightly shriveled and is just browning. At 500°F this will only take about 6-8 minutes. Increase the cooking time if you’re roasting at 450°F or 475°F. Careful using glass baking dishes at high heats as they can break. Sprinkle with lemon juice before serving. Can be served hot or cold. 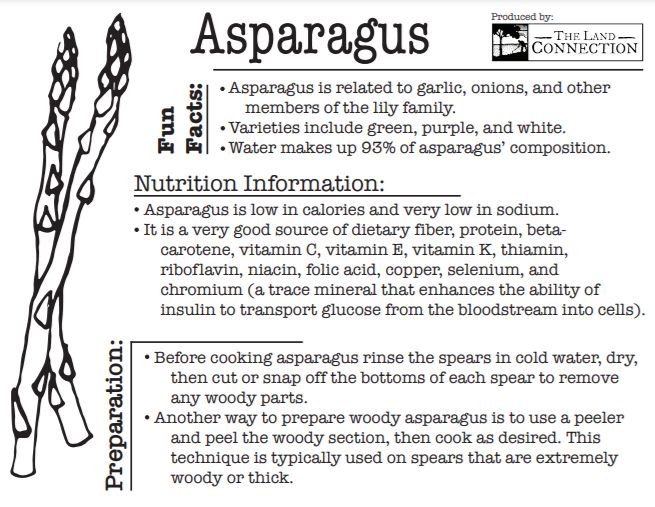