Parsnips are biennials, which means they live for two years, although they tend to be grown as annuals and harvested in that first year. They were originally used as a sweetener in Europe before beet and cane sugar became available. Parsnips also served as the main cultivated starch of the Thirteen British Colonies until it was replaced by the potato. The sap from the shoots and leaves is actually phototoxic and those harvesting parsnips should take the necessary precautions when harvesting and handling. Direct skin contact with the sap followed by exposure to the sun can cause a rash.

Parsnips are rich in vitamins and minerals including several B-group vitamins, vitamin C, vitamin K, manganese, and phosphorus, and are a particularly good source of potassium. Most of the vitamins are found close to the skin so finely peeling or cooking whole is suggested to avoid decreasing nutritional value. If left unharvested until after a major frost, some of the starch in parsnips will convert into sugar and they will taste sweeter. The same starch to sugar conversion occurs when carrots are harvested after heavy frosts.

You will typically see parsnips available at farmers markets and grocery stores with the greens removed. This prevents consumers from coming into contact with the phototoxic sap and to allow the parsnips to be stored longer. Parsnips will typically have brown spots where the smaller roots were before being brushed off during cleaning. These marks do not mean that the parsnip is bad. Larger brown or soft spots should be avoided, though they can easily be cut around and the rest of the parsnip can be used.

To store parsnips, trim off the tops if they have not been trimmed already and refrigerate unwashed in a plastic bag for 2 weeks. For longer-term storage, parsnips can be buried in moist sand and kept in a cool, but not freezing, location. Parsnips can also be frozen.

To freeze parsnips, blanch 1-inch chunks in boiling water for 2-3 minutes then immediately run under cold water or put in an ice bath to halt the cooking process. Drain the chunks of parsnip, let them dry, spread them out on a baking sheet, and put in the freezer. Once the chunks have frozen, pack them into air-tight containers such as zip-lock freezer bags. This prevents them from freezing in a solid chunk and allows you to more easily thaw the parsnip as you need it. Parsnip puree, either cooked or raw, can also be frozen.

Although it is rare to find parsnips with any part of their greens still attached, if you do, make sure to grab some gloves and remove the shoots/stems and leaves before continuing with preparation. Once you just have the root, remove the gloves and scrub the parsnips with a stiff vegetable brush under cool running water to remove any remaining soil and tiny roots. Once clean you can use parsnips unpeeled or peeled, and either sliced, chopped, cubed, or whole. If you peel them be careful not to remove much of the skin as you will remove most of the vitamins and minerals.

If you are substituting parsnips for carrots in a recipe, keep in mind that parsnips tend to be sweeter than carrots so you’ll need to adjust your recipe accordingly.

Raw: grate or shave parsnip on a box grater and add to salads or slaws. You can also slice or matchstick (cut into long sticks similar to carrots) the parsnip and use it as a dipping vegetable with hummus or ranch.

Roasting/Grilling: cut into halves, quarters, or thick slices lengthwise; toss with olive oil, salt, pepper, and thyme; and roast at 450°F for 20-30 minutes or grill over medium heat until caramelized and tender. Make sure to turn regularly when grilling or roasting. You can also cut parsnips into chunks and roast the chunks with other root vegetables.

Sautéing: slice and place in a skillet with some butter, salt, and pepper. Cook the parsnips until the slices start to carmelize on the edges and the pieces are tender.

Steaming: cut into 1-inch chunks, place them in a pot with a steamer basket, and steam for 5-7 minutes. Once they are a little tender pull them out and have as a side dish with some butter, salt, and pepper. If you’re steaming them for a parsnip puree, you’ll want to steam them for a little longer so that they are very tender before blending.

Boiling: cut into 1-inch chunks and place in a pot of boiling water with salt for 8-10 minutes until they are tender. Once cooked you can mash them with butter, salt, pepper, and cream. Boiling tends to decrease the nutritional value of the parsnips, so consider other cooking methods if you care about the nutrition of your dish.

Puree: steam parsnips and puree with onion and curry for a parsnip soup, or add plain puree to soups as a thickener instead of cornstarch.

19 Awesome Parsnip Recipes for Mains, Side, and More – Bon Appetit 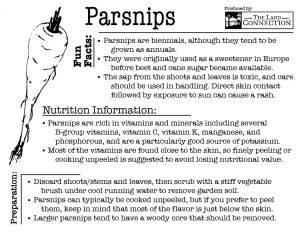