Besides being different colors on the outside, there’s not much difference . . . after all, they’re just beans, right?

Henry David Thoreau, and anyone who has ever grown their own, or had fresh-picked beans from a local farm, would beg to differ. In Walden, Thoreau writes about his “singular experience” of “planting, and hoeing, and harvesting, and threshing, and picking over and selling them,” concluding: “I was determined to know beans.”

A SPECTRUM OF KNOWLEDGE
If you too are determined to know the many excellent flavors and textures of beans, you’re likely to find these and more at your local farmers market: succulent Blue Lake, skinny French Filet or Haricots Verts, Kentucky Wonder, Yellow Wax, Royal Burgundy, tiny Tres Fin, and the large, broad Dragon Tongue and Italian Flat beans.

Many people gravitate toward the slender French beans and steer clear of the big, broad Italian Flat (also known as Romanos) and Dutch heirloom Dragon Tongue beans, jumping to the conclusion that big beans must be over-mature, tough, and stringy. But in keeping with the general rule that the worse something looks, the better it tastes, those big beans are sweet and tender, with rich deep flavors.

EASY TO PREPARE
All varieties of beans are super-easy to prepare. Simply put a pot of salted water on to boil, and while it’s heating up, remove the tips and tails, and snap the beans into 2-inch lengths. Then drop them into the boiling water and taste-test after 3-4 minutes. A tiny Tres Fin will take less time than a standard green bean, which will take less time than a Romano. Keep testing every minute or so until the beans are no longer crunchy, but just barely tender. After you drain the beans, toss them with plain butter, herbed butter, or garlic mayonnaise and serve. Or try this great combination of summery tomatoes and beans. 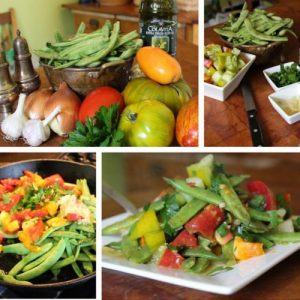 Seasonal Cook’s Notes: Crunchy raw beans are OK on a tray of raw veggies, but they will not reveal their full flavors until they are fully cooked – but catch them before they are over-cooked and limp!