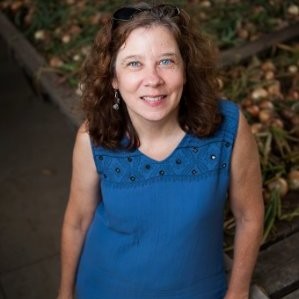 Terra was born in Florida but raised in Central Illinois, where four generations of her family has farmed.  Of course she couldn’t wait to leave what seemed a capital B Backwater, so she “lit out for the territories.”

After spending time at the University of Oregon and the University of California at Berkeley, and then finishing up an undergraduate and graduate degree in English literature and biology at Illinois State University, she went to Japan and worked as a teacher, writer, and editor for five years, and then to New York City where she worked as a writer and editor for almost a decade.  During those years, she traveled extensively, from Nepal to Eritrea to Morocco to the Baltics. While visiting “third world” countries she found she often ate better foods than in the US because their foods were fresh, local, and unprocessed.

As she gradually returned to her roots in Central Illinois, Terra realized that the best food in the world could and should be grown by small, diverse farms that mimic nature, and that communities should be able to feed themselves independent of fossil-fuel based agri-chemicals. In 2001, she founded The Land Connection to save farmland, train new farmers, and connect consumers with fresh local foods.

Terra is the author of The Seasons on Henry’s Farm, which was nominated for a James Beard Award in 2010. She has been honored with a Green Award from Chicago Magazine, a Good Eating Award from the Chicago Tribune, and a rural achievement award from Lt. Governor Sheila Simon. 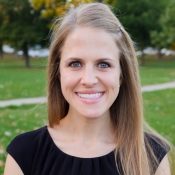 Jacquelyn joined The Land Connection team in May 2018 from her previous position as Executive Director for Sangamon Valley Youth Symphony, a non-profit based in Springfield. It was in this position that Jacquelyn found her path in nonprofit management. During her tenure with Sangamon Valley Youth Symphony (SVYS), the organization underwent substantial change with operations to improve efficiency and productivity; experienced increased enrollment in ensembles; acquired stronger, more secure funding sources; and developed an engaged Board of Directors working to expand the organization’s footprint in Springfield. Jacquelyn holds both a Bachelor and Master degree in Music Education from the University of Illinois at Urbana-Champaign. In addition to her role as Executive Director at The Land Connection, Jacquelyn maintains an active piano studio in the Champaign-Urbana community. When she’s not working, Jacquelyn enjoys spending time with her pets, cooking, and all things outdoors. 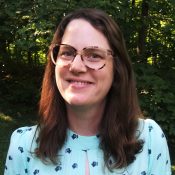 Cassidy hails from Downs, IL and is excited to be back in her Central Illinois stomping grounds after many years away. Growing up in this endless agricultural horizon, she was always fascinated by our working landscapes. To feed her fascination, Cassidy apprenticed with PrairiErth Farm in Atlanta, IL, worked on an organic vineyard in Carlton, Oregon, and managed a community garden space in St. Louis, MO (not to mention the many summers spent detasseling as a kid). She comes to The Land Connection from the Sustaining Family Forests Initiative at the Yale School of Forestry and Environmental Studies where she worked to increase conservation and land management activities on private lands. Before her stint on the east coast, Cassidy spent several years abroad including serving a tour as an Education Volunteer with the US Peace Corps in central China. She has an MS in Environmental Psychology and Conservation Ecology from the University of Michigan and a BA in Studio Art from Webster University. 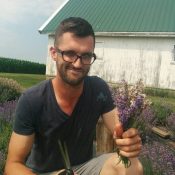 Originally from Philadelphia, Taidghin grew up in the heart of the city and attended a small Quaker school. He moved to St. Louis in 2004 to attend Washington University in St. Louis where he received a B.A. in Art History and Visual Communications and a B.S.B.A. in Marketing and International Business. Following his graduation in 2008, he worked at the University as the Assistant Curator of Visual Resources for the School of Art, School of Architecture, and the Art History Department. He moved to Chicago in 2011 to work in the Office of Exhibition Practices at the School of the Art Institute of Chicago. Living in Chicago provided access to great farmers markets and both Taidghin and his partner became heavily involved in the local food scene. In 2015, they left the increasing rents of the city for Champaign-Urbana. Since then, Taidghin has worked at Prairie Fruits Farm & Creamery and BlueMoon Farm, managed an incubator plot at Prarie Fruits Farm with his partner, started Lucky Pierre Bakers with his partner, and began working at The Land Connection. Taidghin is an avid home-cook and gardener and wants to teach people all about the joys of preparing food with local ingredients, while also working around constraints such as time, money, equipment, or skill set. 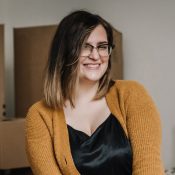 Before moving to Champaign in February 2020, Cay lived in La Salle-Peru, Illinois. It was there that she started her own family, and together, with her husband Kevin, had four children. When she and her family made the decision to move to Central Illinois, Cay began hunting for a job position that aligned with her heart for building community. During that search, she was introduced to The Land Connection and began researching our vision and the importance of helping foster circular food systems. Excited to be a part of our organization, Cay applied for the position of Farmers Market and Outreach Manager. Cay has an eclectic background of various interests and employment. Whether it’s been loading trailers by hand in a distribution warehouse or building a successful wedding photography business in the Chicagoland area, each season has nurtured her desire to help cultivate valuable connections by understanding and learning from the various perspectives of each person she has had the honor of working alongside.

When she isn’t Managing the Champaign Farmers Market, Cay is surrounded by family and enjoys capturing, with her camera, every photo-worthy moment of her husband, kids, dog, and two cats. Her tribe enjoys being creative and they often practice drawing, painting, and writing together. They also enjoy the outdoors and spend as much time as possible in nature by camping, gardening, hiking, and playing sports. Aside from spending time with family, Cay also enjoys studying the holistic approach of herbal healing and hopes to manage a homestead of her own one day. 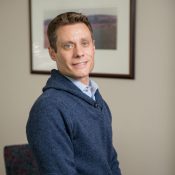 Joe is an Attorney at Livingston, Barger, Brandt & Schroder, LLP in Champaign. Joe grew up in Mt. Zion, Illinois, attended Richland Community College, Millikin University, and law school at Southern Illinois University – Carbondale. In 2004, Joe began his law practice in Decatur, Illinois at a general practice law firm. In 2009, Joe transitioned to a specialized area of the law focusing on banking, real estate, and financial litigation, which took him throughout the State of Illinois. In 2014, his wife’s job brought their family to Champaign-Urbana. Upon moving to the area, Joe immediately set out to become an owner of Common Ground, take advantage of the Champaign and Urbana Farmer’s Markets, and discover locally owned establishments to patronize.

Joe’s aim is to give back to the community in which we live and work to make the community better for the whole. Everyone can make a difference in his or her own way. For Joe he plans to utilize his legal experience as a resource for individuals and entities as they navigate the legal landscape. Joe is excited for the opportunity to lead The Land Connection as their Board President and looks forward to being able to further their mission. 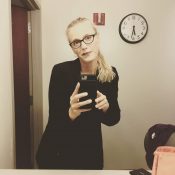 Lisa Bralts-Kelly grew up in Florida and Minnesota, graduated from Macalester College in St. Paul in 1990 before moving to Chicago in 1991, and arrived in Urbana-Champaign in 1996 to work for an independent record label. She is currently Illinois Public Media’s Director of Content and Strategic Communications, overseeing the stations’ marketing, TV/video content creation, and FM services. Area food folks might know her from her previous work – she worked for almost 5 full seasons as the Director of Urbana’s Market at the Square and has also worked for the Eastern Illinois Foodbank, as well as her role as a board member for four years at Common Ground Food Co-Op in Urbana. She has two grown children and lives with her husband in Urbana, Illinois. 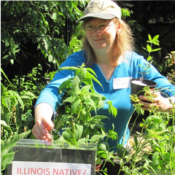 Sue grew up in Chicago’s Austin neighborhood & in a rural area in Cook County later annexed into Northbrook. She earned an MS in library & information science & a BA in English from the University of Illinois at Urbana-Champaign. After teaching in McHenry County, she served as reference librarian at the Merriam Center for Public Administration on the campus of the University of Chicago. She was awarded an MS in Community Development from North Park University, Chicago, in 2007.

Active in conservation issues on the state & local level, she chaired the board of the Illinois Environmental Council, was active with the Chicago Recycling Coalition, & worked as office administrator for the Sierra Club Illinois Chapter. While working at Sierra Club, she represented The Sierra Club Foundation on the board of EarthShare of Illinois. She is retired but in addition to serving on TLC’s board since 2009, Sue volunteers with neighbors on a plan to transform a lakefront building that once housed the Village of Rogers Park’s pumping station into a Lake Michigan Nature Center & to help visitors of all ages learn about & care for an oak savannah & dune land plants in its vicinity.

Sue & her husband live in Chicago’s Northeast Side where she helped establish the Glenwood Sunday Market farmers market, now a project of the Rogers Park Business Alliance. She serves on the Leadership Advisory Council of the GSM. She supports TLC’s work to save farmland & train farmers in organic/regenerative practices, as she sees these as essential to safeguard public health, build the local food economy, restore soil fertility, revitalize & connect rural & urban communities, & improve water quality. 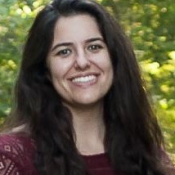 Having lived in California and Illinois, two of the largest agricultural states in the US, Irene has come to believe in the importance of regenerative farming practices in shaping our future. She received her M.S. in Agriculture from California Polytechnic State University, San Luis Obispo in May 2017. Irene and her husband moved to the Champaign-Urbana community in 2016, where she first got involved with assisting at the Champaign Farmers Market.

Irene hopes to make a difference in the food system, starting at the local level. She plans to use her research background and passion for community involvement to further engage farmers and the local community. 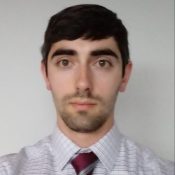 Growing up on a farm gave Jacob a passion for agriculture, home cooked meals, and economic decision making. After earning a degree in Agriculture and Consumer Economics from the University of Illinois’s College of ACES, Jacob started working for Busey Wealth Management to hone his finance and planning skills. Now it’s his pleasure to use those skills to help further The Land Connection’s mission of a healthy and sustainable local food economy.