One of summer’s unsung heroes is the humble squash.  Their delicate skins and flesh cannot be waxed, and so they tend to have a short shelf life, and except for zucchini have all but disappeared from grocery stores.  All the more reason to get thee to a farmers market!

A New World of Squash 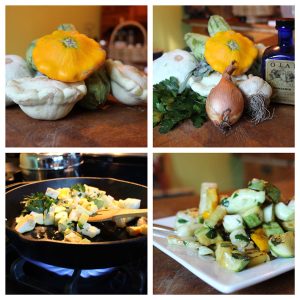 There you will find tender and delicious yellow crooknecks, green and yellow zephyrs, multicolored scalloped pattypans, eightball zucchinis, delicate pale green Lebanese (Zahra) zucchini, and large mottled Italian heirloom zucchinis such as Costata Romanesca. And if you can’t decide, look for quart containers that many farmers stuff full of a medley of beautiful summer squashes.  Yellow Crookneck is one of the oldest documented varieties of squash. Researchers have traced its cultivation to the Lenape people who once inhabited the Delaware valley. Pattypan squash also originated among the native people of the eastern United States. Both the white and yellow varieties date from pre-Colombian times. The first European settlers came to know it by a variety of names in the languages of different tribes. It soon made its way to Europe, and in France was called pâtisson panaché, which translates to “variegated squash,” but which turned into pattypan in English. The scalloped edges of these yellow, white, and/or green squash lend a festive look to any dish.  Zephyr is a relative newcomer – about the same size as the crookneck, but with a sturdy straight neck and a green bottom.   It is a hybrid, with one parent being the yellow crookneck and the other a mixture of Delicata and Yellow Acorn, and delicious. Lebanese Zucchini  (also called Middle Eastern or Zahra) is shorter and plumper than regular zucchini, with an extremely delicate pale-jade skin. It’s almost impossible to get one without nicks and scratches, but don’t let those surface defects dissuade you from tasting the meltingly creamy flesh within.

Squashes of All Sizes

Size actually does matter in the world of summer squashes, but not as you might imagine.  The large ones are good for stuffing and sautéing, the medium ones are great for grilling and for tons of other recipes from soup to cake, and the small ones, well . . . those itsy-bitsy squash are esteemed by chefs more for their looks than for their taste. Their cuteness diverts some from the reality that they are immature and often harsh-tasting. But anything larger than itsy-bitsy is delicious, and as with all fresh vegetables, the simplest treatments are the best.  Grilling is super-easy: just slice them longitudinally, brush with oil, sprinkle with salt, and slap on the grill.  Or try the simple sautéd squash dish below.      Every week, Secrets of the Seasonal Cook profiles a vegetable in season right now, and available at your local farmers’ market.

The best way to enjoy healthy, seasonal produce is to buy it from your local community farmer. To locate the nearest farmers’ market or farm CSA near you, visit www.localharvest.org.

Farm Fresh Now! is a project of The Land Connection, an educational nonprofit that preserves farmland, trains new farmers, and connects people with great locally-grown foods. This series is made possible with generous support from the Illinois Department of Agriculture.